My daughter's up this weekend as her car is now ready to be collected. I went down to Sussex to give her a lift back up to Surrey yesterday (Friday) and as the sun was shining - a bit - we decided to go to Bosham in West Sussex. It's a very tiny, but "chocolate box" village and probably best visited out of the tourist season. The streets are very narrow and go down to the harbour. At high tide the water comes up into the roads and it is not unknown for unwary motorist (who don't read or haven't seen the warning signs) to return to their cars to find them under water!
We had a wander around and visited Holy Trinity Church where, tradition has it, that King Canute's daughter is buried in the church.
I was standing at the side of the raised pavement to take this picture; the water came up the narrow street. 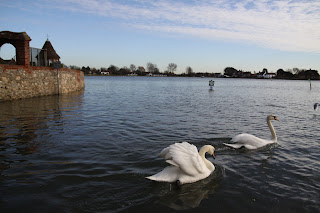 A typical road near the water's edge 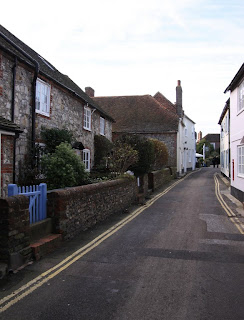 Across part of the green (National Trust property) can be seen the Church and the War Memorial. 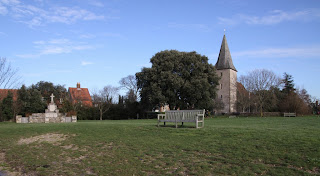 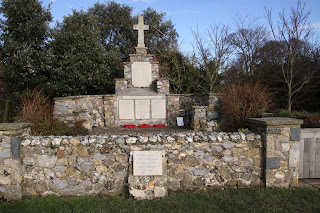 On our way around part of the harbour towards the church.. 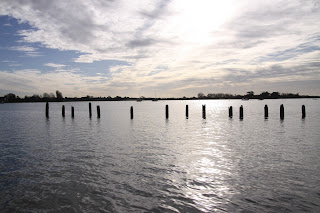 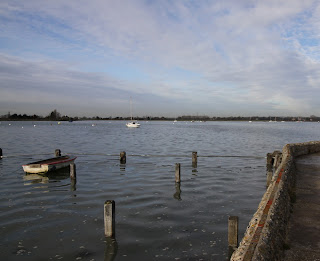 A narrow footpath led us down between attractive cottages 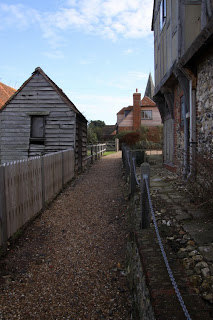 This one having its own wood store. 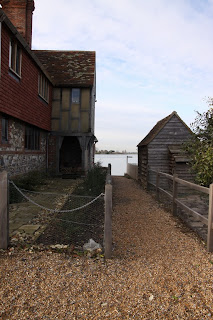 And as we approached the Church crossing a small stream, a notice informed us that the stream had recently been restored to preserve the habitat of the resident Water Voles. 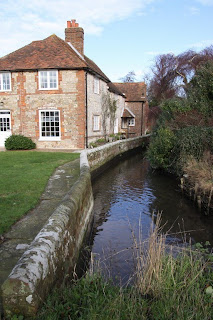 and finally, to Holy Trinity Church - which is the oldest site of Christianity in Sussex. There is some thought that the Tower was build as a watchtower. 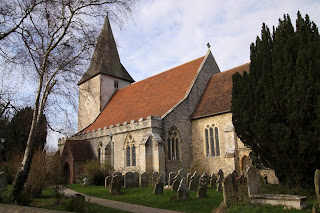 Fancy this as a gate in your garden wall? 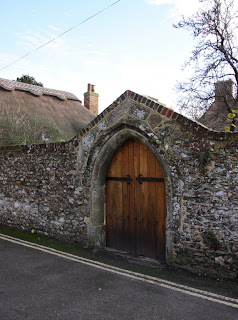 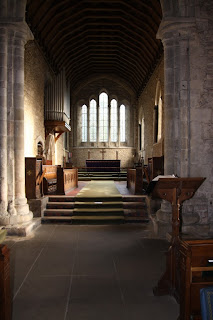 After a cream tea in the local tea rooms within the Craft Shops arcade, we then drove home "the pretty way".
A great day out albeit a brief one. Regrettably my daughter has not been at all well overnight and therefore we couldn't pick up her car today. Fingers crossed for tomorrow but......
Posted by Tricia Ryder at 12/05/2009 03:09:00 pm

It's great to see a bit of unspoilt England Tricia, some lovely old buildings there.

Hope your daughter has a speedy recovery, I can sympathise with her!

Wonderful set of pictures. I grew up a couple of miles down the road, at Fishbourne, half a century ago, and had a boat that I kept at Bosham. At high tide you could row across the harbour to a pub called the Anchor Bleu. I spent much of my youth exploring the creeks and inlets of Chichester harbour by boat and learned to sail and swim there. Thanks for posting these pictures - they brought back a lot of memories!

Beautiful photos and a most interesting place to visit. I like the photos of the church and especially the inside view - where I would certainly have wanted to listen to the organ!

You made the best of available light Tricia, lovely scenes.

They are beautiful images.

Hi Tricia,
These are beautiful pictures... You did the best you could with this light condition. I love the swan shot a lot!

the church is in the bayeux tapestry or at least the arch is.

What a lovely place :). Hope your daughter feels better soon.

I bet thats a lovely place on a warm summer day...

Looks a real treasure of a place.

Thanks for all your kind comments re my daughter. She's beginning to feel a bit better now....

Warren - it's a good spot to visit and even better when the tide's out. Hopefully I'll get back before too long.

Greenfingers - Welcome and it's good to see you here. Thank you for your kind comment and I'm so pleased that my post brought back some memories for you. The Anchor Bleu is still there and on my next visit.... :)

Mick - it is interesting and I need to go back and spend more time there. Especially in the church..

Chris - Thank you; the swans did pose nicely for me :)

Pete thanks - yep 'tis part of the tapestry.

Keith - I must go back more often. It's meant to be great for waders when the tide is out and I've yet to discover that.. I did hear a curlew as we walked along but didn't see it.

I really enjoy seeing the villages over there. Great pictures. That gate...oh my, makes my heart beat fast. I want one. lol

OC - than you. You're in good company liking the gate; my daughter loved it too ;) I'll see if I can catch the Christmas post and send it over.