I'd arranged to meet Frank today for a birding walk around Richmond Park. The day dawned bright and clear and the sun was shining on frosty ground. The bird feeders were empty so as dawn broke I was out in the garden filling up the feeders - and shivering whilst I did so. Must have been minus something in terms of temperature.
By the time I'd set off to meet at the allotted time the sun had gone and it was now very cloudy. Hmmmmm thought I, don't like this very much. Having met in the car park, we walked down to Penn Ponds. En route some Ring-necked Parakeets were on the ground drinking - something I don't see very often. Managed a very poor shot - a bit of green on frost covered ground. 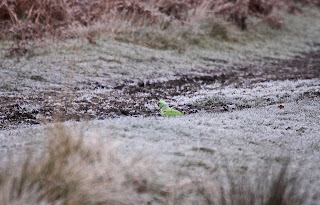 We walked on and by now the odd snowflake was appearing. The light now was very poor. Down on the "pond" a family of Mute Swans were having a preen. 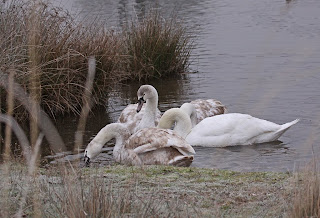 indulging in some synchronised drinking and 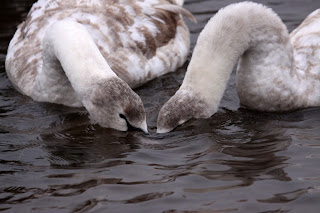 blowing bubbles to pass the time! 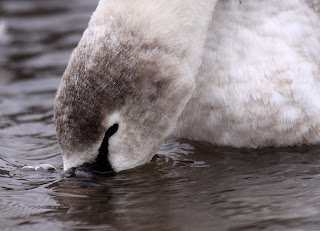 before having a wash and brush up. 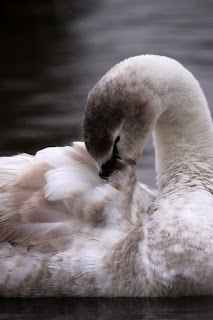 Quite a few Tufted Ducks around - looking cold. Others out on the lake were Pochards and the usual invasion of Coots! 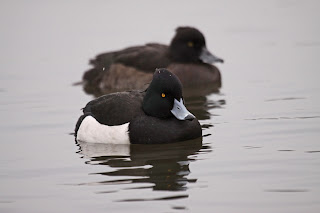 The other pond was looking just as cold and the ice had also formed on part of this pond too. 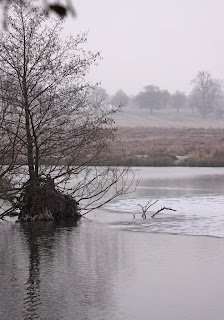 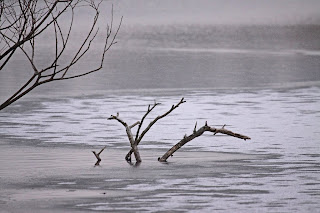 It then started to snow in earnest .... 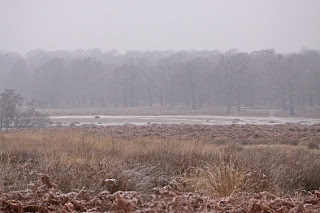 We walked further around towards a large herd of Red Deer. These were mostly stags but there were one or two females with young. 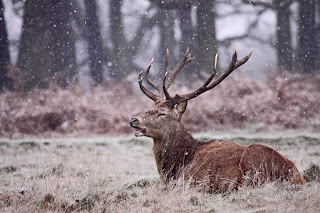 The, by now large snowflakes, were making focusing difficult even using manual focus. 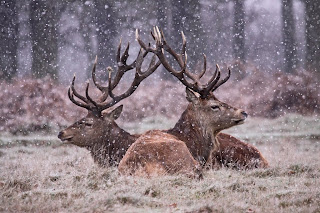 One Stag had the right idea and hunkered down amongst the dying bracken. 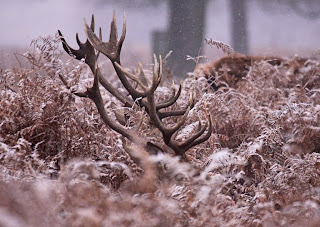 The snow increased in intensity and I reluctantly returned the camera to its bag. And finally, we arrived back at Pembroke Lodge for a welcome cuppa (and, shhhhh, not to mention a rather tasty piece of chocolate cake - consumed only, of course, to give us enough energy to make it back to the cars in severe cold).
Blue and great tits were about and the odd Goldfinch. A male Great Spotted Woodpecker flew up into a tree and we saw a Green Woodpecker bounding away. As we were climbing back up the hill, a Kestrel flew down which we glimpsed briefly before it disappeared into the falling snow.
Difficult to imagine the much warmer day down in Sussex yesterday, or.. 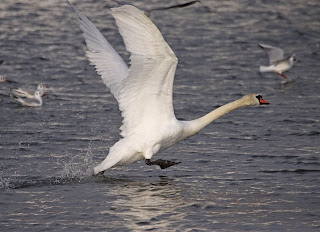 the sunset locally the day before. 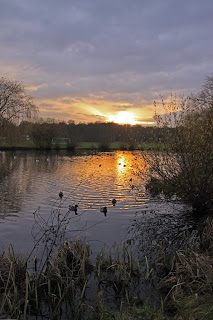 Beautiful post Tricia. I love the tufties picture!!! Guess what, the world is upside-down, everybody is getting snow but Iceland! We even got temperatures of 12°C!! That's incredible!

Debbie is realy taken with the dear in the snow & I must agree, that shot with the two of them laying together is stunning! That last shot is beautiful too :-)

Sounds like a good day despite the weather Tricia. The Stags in the snow is superb. Excellent shot in those conditions.
And that sunset is a cracker. Beautiful golden reflection on the water.

No snow here, yet. Sky looked full of it this morning, but turned to rain in the end. Cooooooold tho'

Hi there Tricia! I have to agree with Paul and Debbie. I too loved the shot with the two of them.

Well Chris has something there! For the moment we are yet to see snowflakes in my part of Scotland too. That could change in the next couple of days of course. Although I did see the beginnnings of snowflakes growing in my garden today. A bit early though.

Hope it doesn't get too cold with you.

Enjoyed your company today Tricia on our wintery walk. We may be holed up for a few days if the forecast is correct for Friday onwards! Cheers FAB.

Lovely images Tricia especially of the Deer in the snow.
Awful weather though.
There is a moral to this story though, "Dont meet Frank in the park". {:)

Lovely photos Tricia, now snow up here yet... Been promised it for the past two days so who knows what tomorrow will bring! It seems to change depending on which website I look at, so who knows??

It looks very much like winter. I just love the shots of the two stags with the snow flakes. It would make a marvelous xmas card. It's beautiful.

You always manage to get some great photos no matter what the weather Tricia. Like others I love the deer in the snow, very atmospheric.
We were lucky. It was -2 when I went to bed but it had risen to +4 by the morning walkies time. Bit of snow about this morning though and the promise of more to come.

Wonderful picture of the two stags with the snowflakes faling!
The sun set from the day before was great too.
Hope the snow doesn't ammount to much, what with all the travelling people will be doing over the next week!

The stags look fantastic! we had snow on the coast for about 2mins but had stopped by the time i got the sledge out! I think the cake was much deserved! :-) SPD

A great batch of photo's Tricia.
My fav's Stags, wash& brush up Swan, + Swan take off. But for pure atmospheric feel, it has to be the 3 photo's below the Tufted duck, and of course the sunset.

Chris - thank you. Perhaps you and I are in the wrong countries?


Paul - thank you and Debbie. I do rather like the two deer meself. :)

Keith - it was a good walk and thank you. The sunset was unplanned - I turned the corner - saw the sunset and stopped!

Shirl - nice to see you here again and thank you. The weather's confusing all of us methinks. I think all plants will go into suspension now the cold is with us.

Frank - likewise! Hope the weather doesn't live up to the forecast!

Roy - thank you; we were wrapped up warmly so somehow the weather didn't matter too much except where the camera was concerned.

Liz - I think someone turned round the UK and now the north is the south and vice versa!!

OC - reluctantly I have to admit that winter's here. I will print a copy of the stags and see what it looks like. Good idea of yours about the cards..

John - thank you very much for your kind comment. Think the thermals will be staying handy for the foreseeable future!

J - thank you. Fingers crossed we can all reach our destinations without mishap or hold up!!

Thank you for stopping by and leaving a such a nice comment; I'll be popping over to see you in due course.

SPD - thank you :D :D it's the sea that keeps the snow away lol

The cake was great and no hint of a conscience either (my conscience that is, not the cake's)

Paul (anon) - thank you for your lovely comments. I'm sure the snow and dull conditions actually helped with the atmosphere when taking these pictures rather than hindering as is often the case.

Brilliant photos, the stags in the snow is stunning, no wonder you've used it as your title bar!