I went down to Mum's the other day and her Redwings were still about. Not only that we were lucky enough to see a Fieldfare in the tree just over her fence at the bottom of the garden. I didn't leave it very late before coming home as it had started snowing again. Her village is almost impassable. Just as I got into the car this Redwing landed on the berry-laden tree at the front of the garden. It was determined to hide though.. 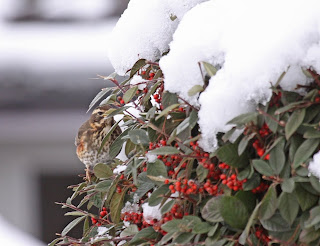 I awoke this morning to a further covering of snow!! Looking out into the garden, this was the view: 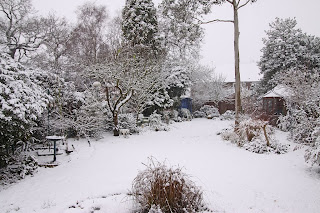 In the apple tree, the Rose-ringed Parakeets looked a tadge dejected.. 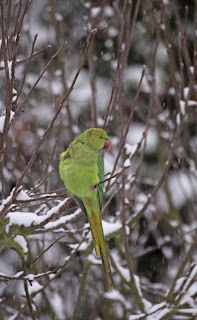 "Coooeee", "Could you turn off the snow please?" 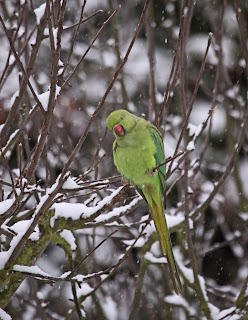 I couldn't stand being indoors any longer despite the snow falling overnight and continuing into the morning so I headed off for Painshill. It was open and the lady on reception advised that out of the "normal" 300+ visitors expected there had been only 11 and 2 dogs!!
The entrance to the park, was fairly bleak.. 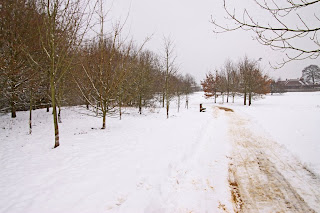 As I crossed over the bridge heading for the visitor's centre and entrance I glanced down at the cold looking river but I was seranaded by the sound of twittering Goldfinches! 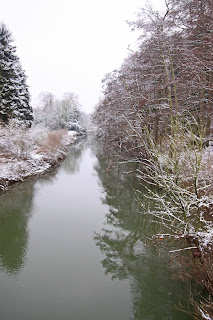 A slight diversion to the visitor centre as the steps were covered in snow! 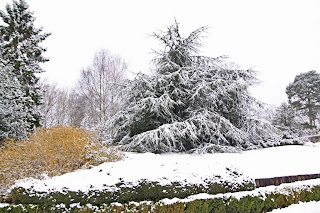 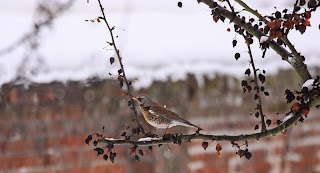 The beginning of the park and the light was already fading. 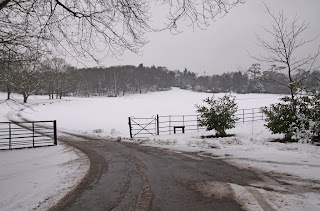 So I headed off through the woods to the lake. 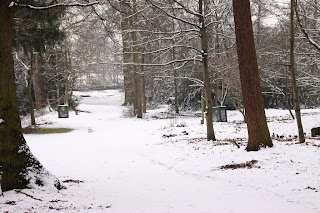 Several pheasants around. This area was now cordoned off as it led to the frozen and snow covered lake. I could see why - unless (as I do) you know where the lake ends and the paths starts you could be in trouble!
Pheasants abounded.. 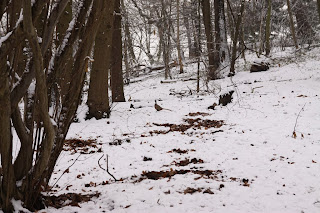 I ventured down (don't tell anyone though) and this was the sight that greeted me. 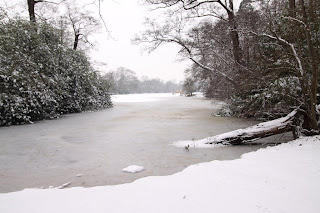 Walking further through the park and up the hill.. 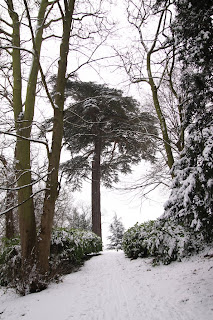 where I could look down into the lake. You could be forgiven for not knowing that this is the lake with it's narrow strip of island. On the immediate descending bank is the old vine - looking a little sorry for itself at the moment. 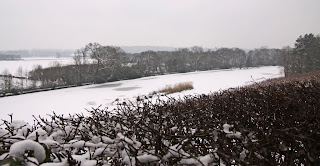 I love this bit of the park with its wooded area. Now I could hear a Woodpecker drumming (a bit early in the year?) whilst a Nuthatch called. Several Redwings scurried through undergrowth in company with Blackbirds, a Fieldfare and a Songthrush. Blue and Great Tits darted about in the tops of the trees overhead. Several crows cackled in the nearby field and Robins and a Wren darted about. 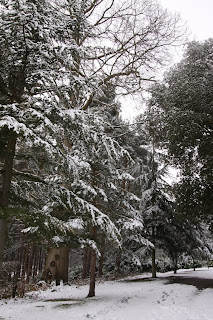 Down by the lake, the birds were staying close to the only unfrozen part of the water 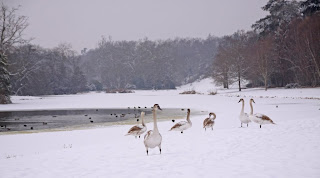 It was the Mallards who, as often, provided some colour to the day.. 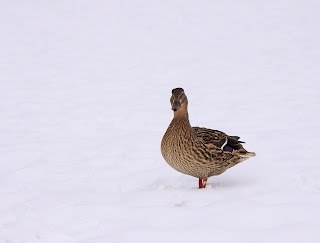 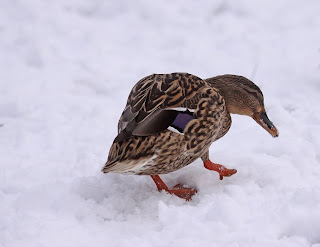 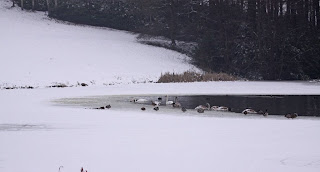 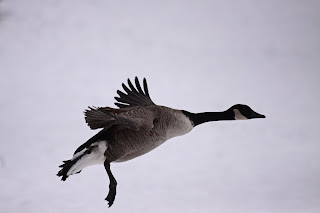 and approached the lake to land.. 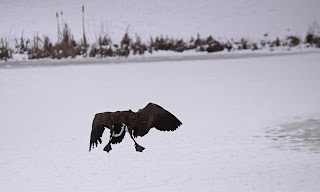 More of a crash landing.. 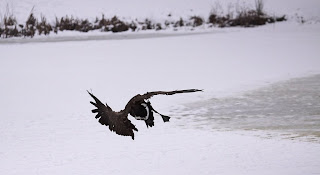 A Mallard then flew over 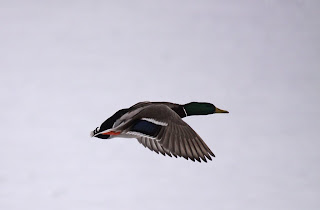 I wander back through the woods again listening to all the birds. Apart from the birds and a squirrel, I was completely alone. It was wonderful just to stand look and.... listen.
Light's really fading now so, time for home and a cuppa ;)
Posted by Tricia Ryder at 1/13/2010 05:35:00 pm

A nice blog, with pictures and the lyrics. Beautiful.

Know how you feel Tricia.

Hi Tricia,
I guess I know the feeling, at one point you need to go out, and I'm surprised you saw so many birds with all this snow around... Nice post again!

Although we had snow for weeks I think you had it all at once by the look of it. Guess what - it has started to snow again, just as we had got rid of the last lot.

Now I know where my Goldfinches keep disappearing - they are serenading you ;)

A beautiful walk in the snow is great Tricia - even without the added wildlife - these are just a wonderful bonus - did you enjoy Simon's impressions of a hare on Snow Watch - I'm guessing this would be the kind of programme you'd watch? Anyway - enjoy the weather whilst it lasts... I love it! Miranda

Lovely post Tricia. I'd happily swap with you for a couple of days.

The poor birds, they must be finding it difficult, not being use to the snow and cold weather. Let's hope it warms up for you soon. Great pictures as always.

I'm hoping that, like us, the snow may have left you now Tricia but you certainly got some very atmospheric photos, I loved the flight shots! Also the Parakeets which still look 'wrong' however much I see them on blogs :)

Another beautiful set of pictures Tricia! Just love the snowy scenes, along with the wildlife, just a shame its not very practical!!! glad you stayed safely away from the frozen lake!xxx

My apologies to you all for the delay in responding to your comments - which are always appreciated!

Roy - soon it will be Spring!!

Chris - The birds are looking for food everywhere,.

Miranda - thanks. Simon was hilarious as usual.

Jan (SS). It's certainly gone now but there's some forecast for tomorrow!!

Karen - thank you. I certainly didn't feel like a dip in this weather!

Thaks to your blog, i learned some birds names... and I enjoy the pictures... I m impressed to see how wildlife can be pictured !

Hi Touring in Brittany. Thanks for visiting and I'm glad you added to your knowledge by doing so :)