Apart from the Parakeets being their usual noisy self, it's been a less eventful day today than yesterday. Later on this week, it's my Grandson's birthday and only yesterday did he come up with some ideas for presents (via his Mum!). Up till then he been quite decided that there's was nothing in particular that he wanted. Coming from a 10-year old (at least for a few days yet) I was quite impressed!

So this meant I was in Kingston-upon-Thames for some shopping. This afternoon was mostly domestic but by 5.00 p.m. I couldn't stand it any longer so got out my trusty steed and went for a cycle.

As I sat on the saddle I realised that I was feeling the effects of yesterday's cycling trip (the first for a long time)so it was a tad uncomfortable initially! How these lycra-clad young (and not so young) men manage with saddles that look razor sharp, I do not know!!

Decided to have a cycle round Bushey Park and only took my compact camera as a last minute impulse. This was the wrong decision as a) the batteries died after the second picture and, even more maddening, b) there was a Great-crested Grebe about 8ft away from me being side-lit by the sun which was now reasonably low in the sky. This was really, really, annoying as I hadn't got my big lens and the camera with me. Hey ho - perhaps a return trip later in the week if I have time.

My only two pictures today are of
The Diana Fountain 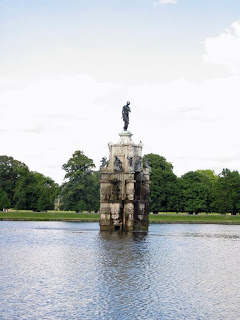 and the banks around it. 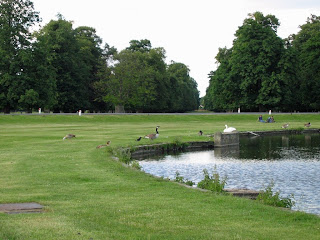 Email ThisBlogThis!Share to TwitterShare to FacebookShare to Pinterest
Labels: Locations