Scotland '05 Part 1 Kinnloch Rannoch, a loch and a mountain

Before I start - Happy Birthday Pete

There are good days and bad in terms of weather. Today is good for all growing things but bad for being out and taking pictures.

As we seem to be getting a number of wet ones recently, I thought I would share my holiday in Scotland with you from when I was there with my Mother in June 2005.

I'm not going to post the entire week's pictures in one post (Phew - I hear you say) but add a little, on the days where I haven't been out anywhere or don't have anything of particular importance to report on (what a sad person am I!).

In all my "Scotland" posts, with regard to the activities and pictures, the key theme is

The journey started for Mum in her home area of West Sussex and driving up to me in Surrey.

The following morning, we were taken - at about 9.00 a.m. - to a local station and thence by train to Waterloo. A pre-ordered car took us across to Kings Cross (Mum can't travel on the underground trains) where we caught the train for Pitlochry. Except, on that day, the trains (due to engineering work) were only going as far as Perth - isn't it always the way!! So we were to change at Perth and travel onwards by coach. OK - sounds simple.

However, the train, at a point before reaching Doncaster station, suffered damage to the windscreen of the driver's cabin thereby causing it to shatter. The following announcement by the train manager, advised us that we "would be going "very slowly" until we reached Doncaster station where - either a) the windscreen would have to be replaced (oh joy thought we) or the train would be put into reverse for the remaining journey."

(I hope you're still with me at this point - it might be a good time to get a cuppa!)

We were reversed - hoorah. Apparently Doncaster is one of the few stations whereby a train can pull into the station moving forwards, reverse out on a different line, then forwards on yet another different line and then reverse onto the original line taking us north again. So our carefully planned "forward facing" seats now became "rear facing seats" with the rear engine, now at the front.

Having arrived at Perth we then had, in addition to a long platform walk, a very long slope upwards, across and downwards over the bridge - and I had two suitcases (one of which on wheels) and my mother to support to get us up and down. Hoorah for a great lady Cabin Crewe member who gave us a hand to the coach.

Eventually we arrived at Pitlochry station at 20.30 to be met by our tour courier in a mini-bus to take us on the last 20 miles to our Hotel in Kinnloch Rannoch!

Once we were off the main highway and onto the local roads, all the traumas of the day fell away - the scenery was absolutely stunning.

High mountains stretching majestically away up into the sky; streams of gushing water running down the hillside and away under the bridges over which we travelled. Amazingly breath-taking views travelling past Loch Tummel and above all else the sound of - silence.

And finally, we arrived at our Hotel on the side of Loch Rannoch with wonderful views of Mount Schielhallion. It was now 21.30 and the Hotel had held over dinner for our party.


From the far bank to the hotel and that's it
... the Hotel, a road, a loch and trees 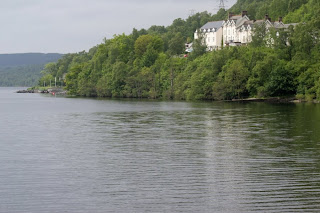 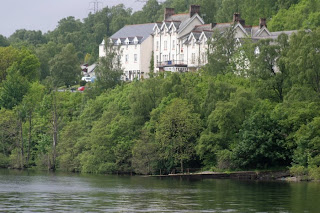 Standing in the hotel car park and looking across the width
of the Loch, (about 1 mile) to the far side of the Loch.
The Loch is about 10 miles long. 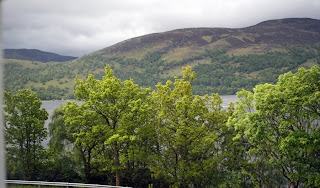 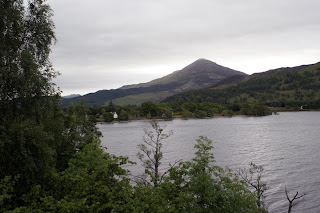 and to the right, in the distance, Glen Coe 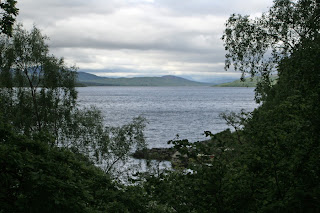 What a nightmare... the joys of public transport..
I will enjoy these posts of Scotland... a place I've never been but must get to one day. Your pictures are a delight, I like doing this trips on my blog, as you know. I also enjoy reading others to.. so thank you I know the effort you put into these.
Tom

lol Tricia, sounds like your trip has been far more exciting than any of my trips up to Scotland so far.

Unless you count our trip to Edinburgh last october where two carriages were missing, and yup one of those were ours!

What a lovely country. I'd love to go there sometime. Looking forward to more pictures.