Birds in Surrey and Sussex.

It's been an odd few days. The weather seems to have reverted to more winter-like conditions. And, rather like Keith, my pictures seem to have been building up a bit so there's rather a few in today's post. I seem to be playing catch up!
Just a quick garden note. The Great Spotted Woodpecker that's been drumming virtually daily (and is doing so as I type - yes it's 6.15 a.m.!!) for the past three weeks is still drumming every morning. He sits in exactly the same space in the same tree still. I do wish he would get an answering "drum" one of these days. I'm beginning to feel quite sorry for him.
The frogs have finally finished spawning - well at least I hope they have. The spawn almost reaches across the width of the pond in one place! 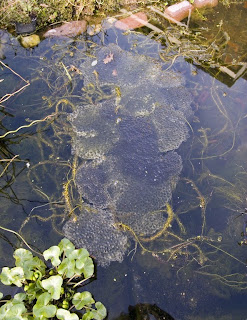 I was down in Sussex visiting Mum the other day. It was extremely murky and misty and visibility was reduced considerably. However, we still had a visit to our favourite pub - the Sportsman in Amberley. Fantastic views over Pulborough Wild brooks but most of the birds had now moved on. This area floods every year and the waters have now receded somewhat.
From there we drove through Arundel and called in to the car park of the WWT Arundel. The weather didn't permit a visit into the reserve itself but I had an agenda - I wasn't disappointed. Quite often high above the high hills overlooking the reserve you'll see buzzards. I heard them as I drove in and we sat there for sometime watching four of them calling and gliding high above us - lovely!
There were hardly any cars in the car park but this rather handsome chappie kept us company. He was obviously very bored with our company and kept dozing off! I've never noticed before how strange their eyes are when they are closed! 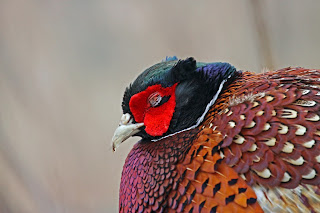 as opposed to when they are open! 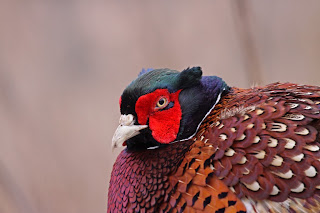 He obviously wasn't at all bothered by having a camera lens pointed at him and continued to sleep through the proceedings. 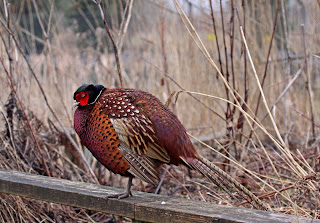 Then a couple of days ago, I went for my usual potter about in Bushy. Delighted to discover that one of the Great Crested Grebes was back - still no sign of the second one however.
Another sleeping bird who lazily stretched a leg while dozing - well he didn't want to overdo things now did he! 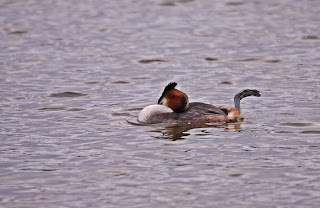 The Mute Swans have just started nesting again. They're in exactly the same spot on the same little island as last year when they successfully raised all 8 cygnets. 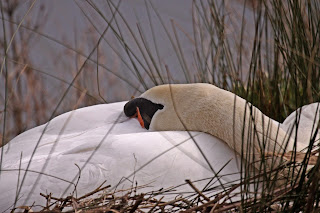 A coot has a wash and brush up - but it's missed the top of its head which is still a bit grubby
(click on the picture to enlarge it!) 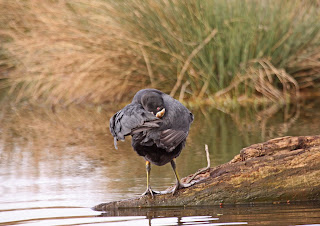 A new breed - this is a Helicopter Black-headed Gull ;) 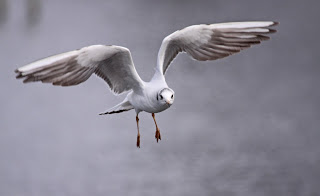 Now, regular readers will have seen Punk before
(Punk is a Pochard crossed with a Tufted Duck) 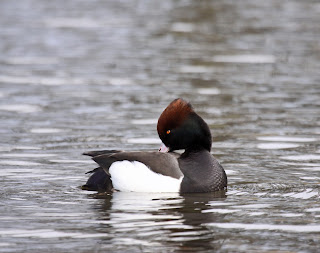 So what is the parentage here please? 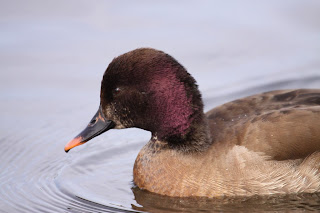 Into the woods and this little wren paused for a minute so I could grab a picture. The wren's are singing a great deal at the moment - a wonderful sound! 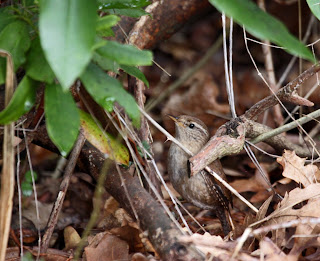 I noticed this nest - it was very high up and therefore difficult to see the bird.
Initially only the tip of it's tail feathers were visible. 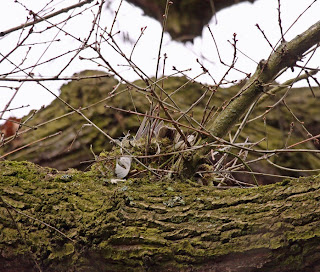 Then it had a wriggle and more of the tail appeared! 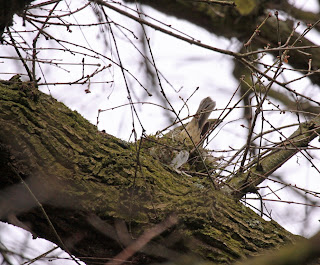 It then flew off the nest and came back with more nesting material. I'm pretty sure it's a Mistle Thrush (?) 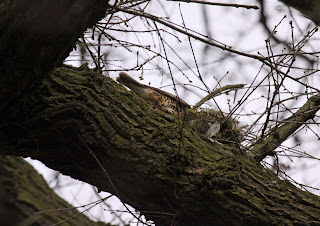 And now the cute bit - the three Goslings are still - three! 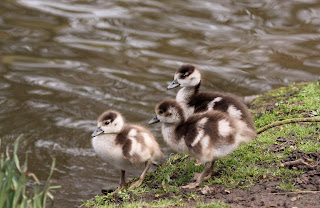 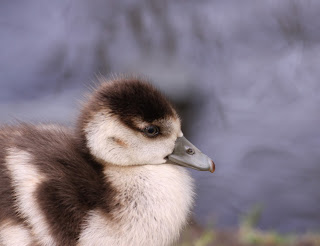 I love walking through the Silver Birch woods. The ground is covered with daffodils and should be at its best in a few days - IF we get some sunshine! 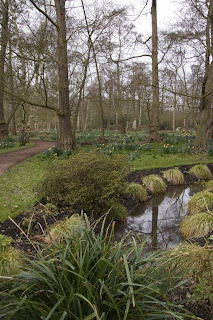 The following are various points around Bushy - mostly taken in the two gardens. 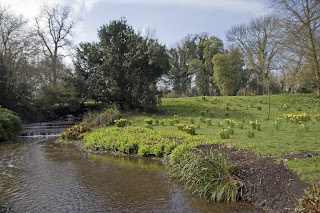 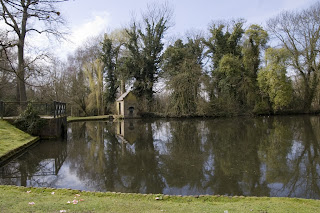 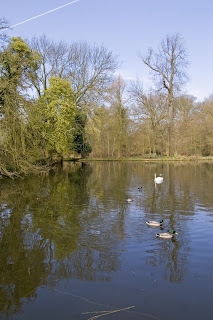 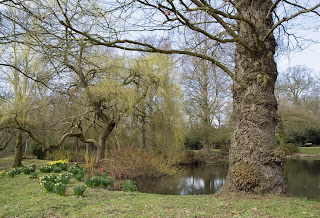 Out in the main area of the park is this wonderful Weeping Willow. It must have fallen many many years ago. The tree has long since recovered and doesn't seem to be suffering from the metal guard (to prevent the deer eating the young sapling). It's amazing how it's grown into an upright position although lying on its side. 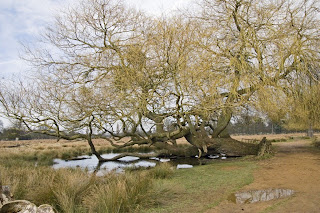 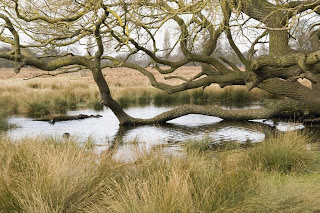 Along one of the many small streams. 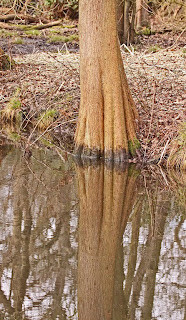 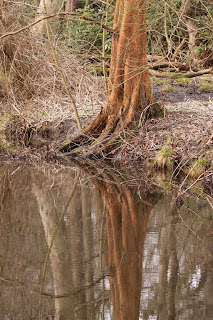 And finally, (phew I hear you gasp - assuming you've made it this far!) one of the rhododendrons now fully in flower. 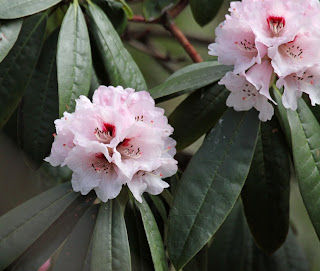 Looks like you've been having a good few days recently! I love that Great crested Grebe shot with the leg stretching out. Your mystery duck is a Red-crested Pochard x Mallard hybrid, and the tufty hybrid is a Red crested Pochard x Tufted Duck. Great landscapes as well, very atmospheric. Keep up the good work. Bill

Goodness me, what a lot of frog spawn. I think you could stock all the ponds in the county.

Love the tree and reflection photos and of course not to forget the Awww piccies.

Hi Tricia,
This is a very nice post and I love the reflection shots of the tree trunk!

When it turns to hybrid (like your pochard x tufted) then you can really have very strange colors and head patterns. We have the case here with apparently some ring-necked duck x tufted duck hybrids. Some have very strange patterns!!!
Nice to see that you were able to capture a wren, these little bombs are so hard to get ;-)
The sun is back here too finally, but it is still rather cold.

lol, and I thought it was just me who got up at silly times in the morning. 6:15? Nice though aint it.

What an amazing ammount of spawn in your pond. Productive little chaps.
The Pheasant's a beauty.
Looks like a Mistle Thrush to me Tricia.
A great selection of shots, and the goslings are just, awwwwww.

That started with a bunch of sleepy ducks, and on and on they became a beautiful so natural.

BillD - the Tufty/Pochard cross has been around for a bit now and featured in other posts. However, the the mallard/RC Pochard is a new kid on the block... interesting combination..

John - it may have been much later this year but it's significantly increased in quantity. Be interesting to see how much develops!!

Chris - thank you - the wren took a long while to come anywhere near enough getting a picture! Glad to hear your sun is back....

Keith - It is rather a lot of spawn isn't it lol.

I love the early mornings.. :D The Awww goslings are still the only young I've seen so far... even the birds seem to be nesting later.

Good heavens woman, you're going to be over run with froggies by the looks of it, lol. An absolutely gorgeous pheasant. All the pictures are just wonderful.

Hi Tricia,
I'm sure the Great Spot 'drums' not for a reply, but to tell others that this territory is occupied, it also attracts the females in.

The bird on the nest is defo a Mistle thrush - nice one!

Hi Tricia, once again great photo's
I think your spot on with the Mistle Thrush, good looking rounded spots, it has to be. Song Thrush has arrow head spots.
Just love the hovering Gull, looks at first like an adult winter,but note the pale orange-toned bill and legs, so a bit to go yet, a great caught photo.

Lovely lot of photos Tricia. The little goslings are really special and hopefully will add to the E/Goose population. I think your right about the Mistle Thrush and 'Rhodees' already are you in a different hemisphere down there.?

OC - I think you may have a point there LOL. And thank you.... the pheasant was rather a handsome chappie.

Paul - thank you. Most of the black headed gulls have got their black (brown) heads now but a few are like this.

Roy - thank you. I think you and I are in the same country! lol These rhodos must be an early flowering variety!

Pete - thank you :) was rather pleased with the landscapes (all with the 20D !)

Hi Tricia, Lovely set of pictures! You certainly are a Lark, 6:15am, the only time I see 6:15am is when I am working nights. One of my goals in life is getting up earlier in the mornings, convert from being an owl to a lark! Don't tell me, you are both lark and owl {;) I have seen Rhododendrons out in flower here in the South, also all the Daffs are out in flower here too:-)