Marsh Frogs? and other things..

Yesterday was absolutely wonderful in terms of weather, warm and sunny - the best weather day of the year so far :D I headed off to Barnes (London Wetland Centre) to see what was about.
Sand Martins have started nesting; 3 Redshank were chasing each other about. A Little Ringed Plover was out on the scrape. Common Terns had been seen but not by me. Cetti's and Sedge Warblers - warbled and Blackcaps seemed to be everywhere. Still haven't managed to photograph a Cetti's - one day perhaps.

What I did see, and hear, were Marsh Frogs. 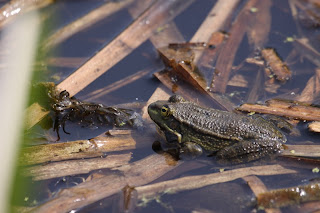 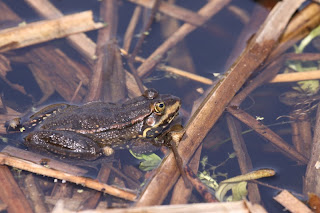 But this was is very green. Is this still a Marsh Frog? 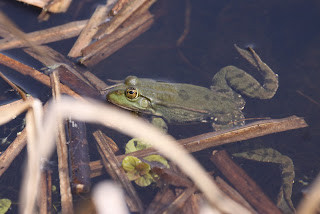 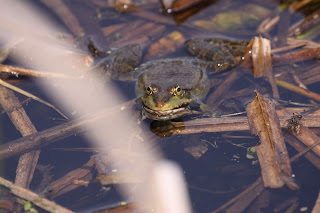 There's a hybrid Goose which is a cross between a Canada and Greylag Goose - and very odd it looks too. And on this occasion it also looked quite ferocious as it chased off a Canada Goose. 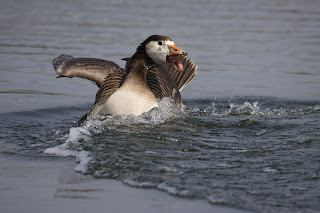 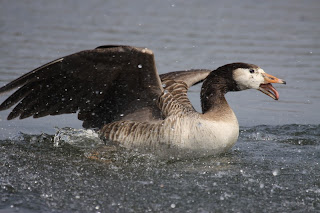 It has rather a "bald" look. 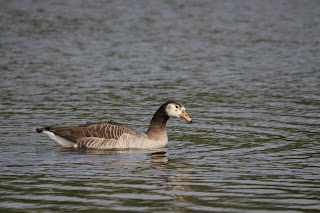 The pair of Great Crested Grebes were doing nothing but sleeping today. Still no eggs laid and there's a school of thought that suggest the varying height of the water may be having an adverse affect on the nest. 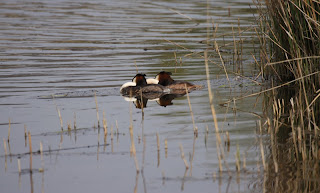 I wondered where this Greylag was heading off to.. 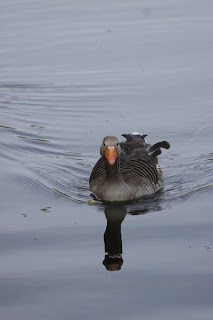 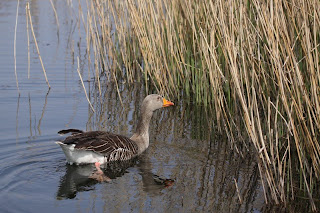 It seemed to want a meal of reeds! 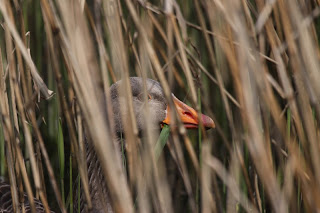 One of many Speckled Woods but looking a bit battle scarred. 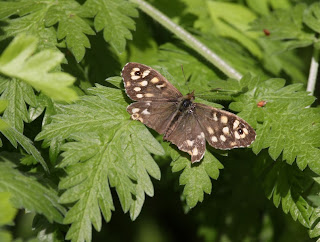 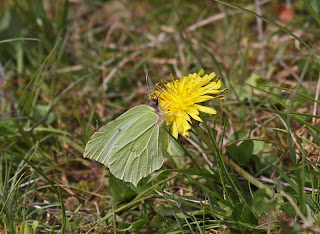 And today is Sunday - and it rained this morning. Although it did liven up the garden somewhat. There's more colour at this time of the year than any other season. 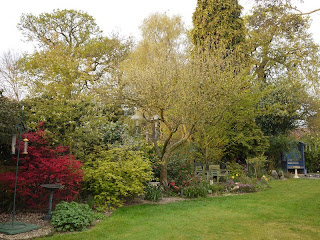 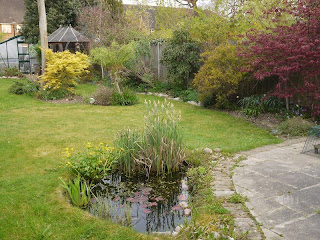 And later on I had some shopping to do. I decided to take my new camera into Kingston-upon-Thames...
This is the Ancient Market place which has some interesting buildings 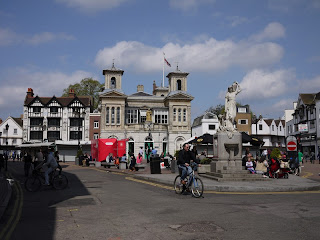 The Market Hall. During the week there are many market stalls. It used to be all fruit and veg but now it's a mish-mash of everything it seems! (Closed on a Sunday) 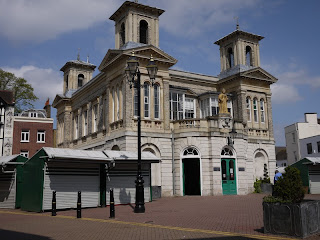 Just off the market place, you can take various short routes through the buildings to reach the River Thames. This alleyway sandwiched between the shops is just one of them.
(if you've noticed the "Borders" sign. Regretfully this is one of the bookshops that became victim of the recession - it also had Woolworths as a neighbour) 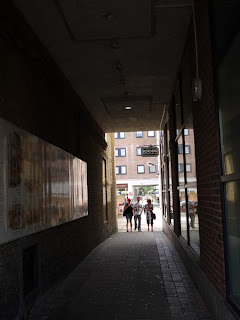 You can walk a little further, and go down the pathway along side the River Mole which runs into the Thames.
This is Clattern Bridge 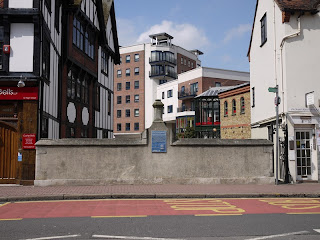 and you can read about it here.. 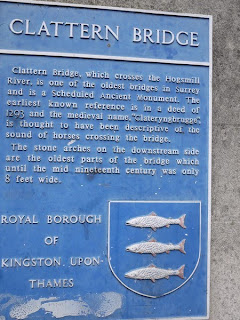 Having gone down the steps and turned around to look back, you can see the arches referred to in the notice above. 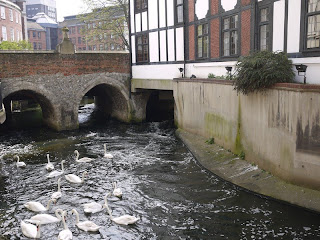 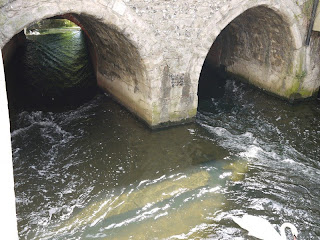 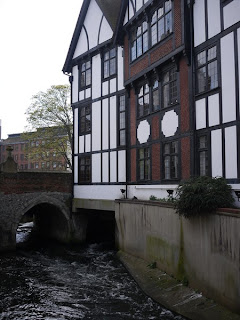 Walking further away towards the Thames and looking back at the Clattern Bridge, the newer developments on the riverside come into view. 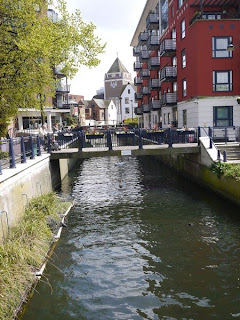 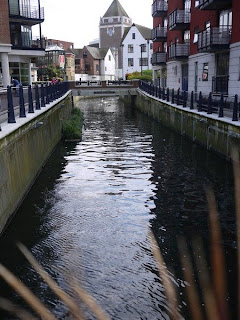 Turning around to face where the two rivers meet, some of the multitude of Mute Swans. I gave up counting after 70!! 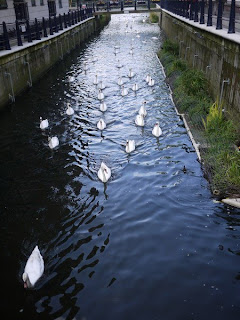 Coming out now into the River Thames and this is a bit of the view with Kingston Bridge on the right. 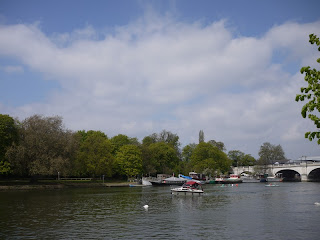 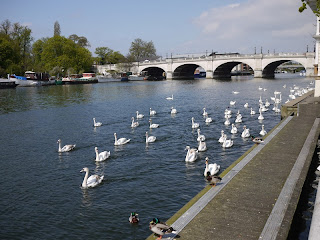 I became mindful that I was paying to park so called it a day and headed off to pay my dues for the car park..... next time I'll get the bus (but there's only 1 per hour!) Nonetheless it was good to be out now the rain had stopped and the sun shone fitfully.
Posted by Tricia Ryder at 4/25/2010 04:30:00 pm

Email ThisBlogThis!Share to TwitterShare to FacebookShare to Pinterest
Labels: b, Barnes, Kingston-upon-Thames, Wildlife

Costas - my goodness that was quick! Thank you as usual for your kind comment..

Nice amount of water birds, frogs, butterflies and others.

Your hybrid goose is a dead ringer for one that's here at a local lake. Perhaps we should get them together? lol

Loved the tour of the area. (and pictures). All completely new to me. Really enjoyed it. And those Swans! 'undreds of 'em!

I have seen that hybrid goose on the Thames by the Wetland Centre. A big male and a bit of a bully I think...

A great set of photos. Must have been a grand sight to see so many swans together.

The frogs on the "Levels" were calling too...I suspect that only the marsh frogs are SO vocal and so warty. Therefore I guess your frog are marshies.

Bob - thanks; I love this time of the year for its variety

Nathalie - this one certainly was a bully - could be the same one as you say.

Mel - I wonder what would happen with the frogs if.....

John - It always amazes me just how many swans there are in that particular spot. There were several young from last year but even so the numbers are so great!

Peter - I'm sure they are Marsh frogs but I was surprised how green one of the was. And they are rather noisy.... :D