Tales of the unexpected!

I'd been up for a while this morning and on an occasion as I came into the lounge with camera in hand ready for going out, I heard much twitterings and several youngsters flying about. This (parent I think) landed and I hastily pointed the camera at it through the double glazing. Luck would have it that the camera's settings were great for this!!
Ballet anyone? 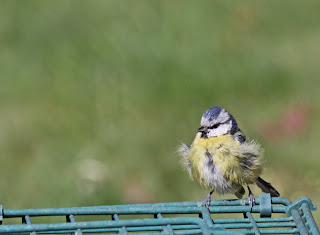 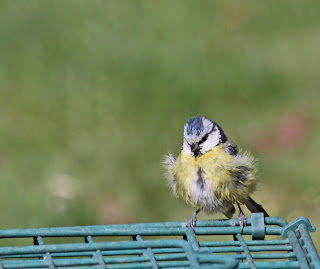 I decided to head over to Barnes (London Wetland Centre) again today. I'd hoped for some shots of Terns as they are very active at the moment. For some reason, I just couldn't get any decent pictures of them today so these are poor offerings of wonderful birds! 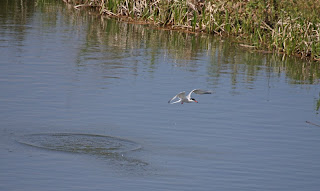 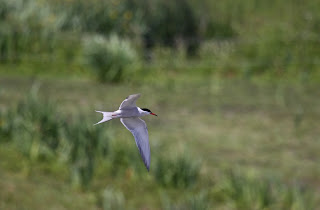 A Jay has been seen in this particular area and it seems to hover over the leaves grabbing insects before resting in the tree. 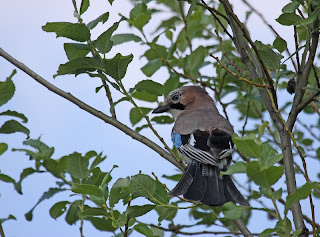 However, it took one look at me.. and 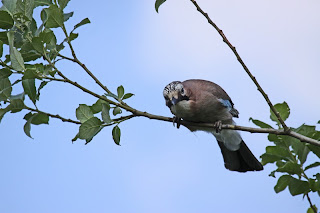 didn't like what it saw, so dived off very quickly! 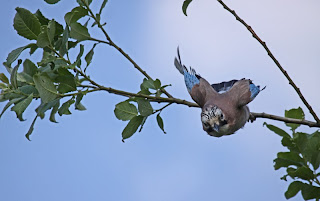 These jackdaws seemed to be sunbathing with wings outstretched and beaks open but.. 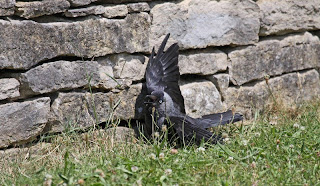 they continued to keep their beaks open whilst looking for something in the crevices of the walls (insects perhaps? ) 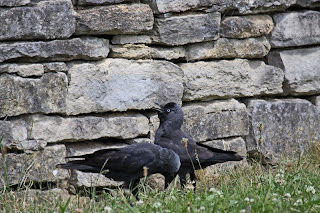 Word then quickly circulated that a Tawny Owl was in a tree just outside the reserve. Directions given and accepted a few of us headed off. It was very very high up and difficult to see - in fact there was about one spot only where there was any chance of a clear view. However, the Tawny was well hidden behind leaves and it was only when the wind blew the leaves that there was any chance of seeing both its eyes at the same time.
Uncannily, whilst I was standing there, under said tree, Pete sent me a text (thanks Pete) telling me that there was a Tawny at the LWC! - this having been announced on Twitter by the LWC ( Jamie on the ball as usual - thanks Jamie). Ah modern technology - the grapevine never worked faster!!
These were the best I could manage! 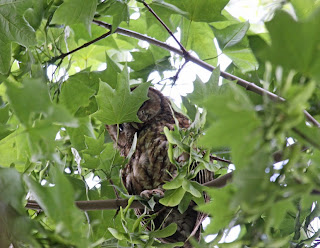 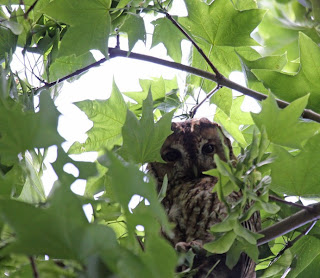 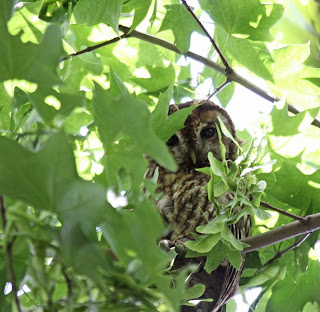 The purple Irises are looking great at the moment... 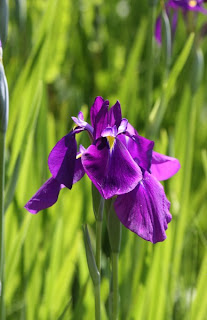 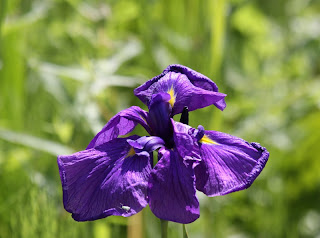 and someone gave me the 'heads up' as to where I could find Bee Orchids - thanks John I found them - little beauties that they are! :D 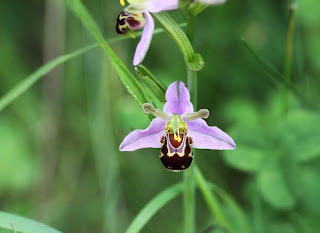 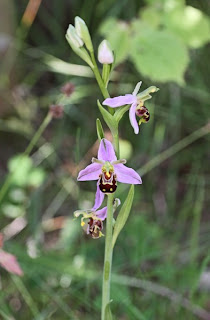 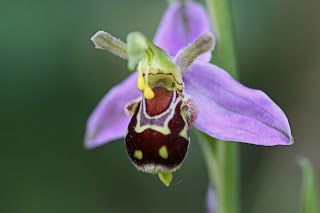 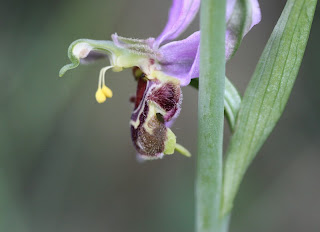 What a great visit Tricia; Tawny Owl and Bee Orchid. Both missing from my tick list lol
Those Jays behave just the same with me too. Just can't get close :(
Good catch flying towards you though.

Hi Keith - just pure luck and being in the right place at the right time - for a change!! And when you feel like a visit... just let me now :D

I love that Tawny peeking through the leaves.

Great photos - the tawnies are a great spot! And I love th orchid pics!

I had to chuckle at the photo of the Jay when he caught a glimpse of you ~ great shots as usual. The owl is also spectacular peeking through he foliage. Lovely irises as well. Do the blue eyes of the jackdaws indicate that they are youngsters?

Nice shots of the Tawny Owl, and the Bee Orchids are very beautiful.

That second shot of the owl is particularly fetching! :). If I'd tried to take a photo of the Tern it would have been an off-white blob. Haha

Your pictures are just wonderful. That little bird in the first two photos is charming. I love the owl as well, peeking out through the leaves. Great stuff.

Roy - regrettably they are so it was wonderful to see them

Geordie - it was so high up and almost directly above our heads - had to lean against the fence to stop falling over while I took the picture!

Glo - it was entertaining watching the jay too... it was grabbing insects of the trees!

I don't know about the blue of the eye's of the Jays... I shall have to research this!

Razboynik - the bee orchids were an unexpected find!

Gaina - thank you. Most of my tern pics ARE off-white blobs so I was pleased I managed a recognisable shot at least ! lol

OC - thank you. That little Blue Tit was a very welcome visitor to the garden! And I was so lucky with the Tawny Owl!

great visit, Tricia. Love the Tawny with half its face hidden. It is the atmosphere which makes the picture.

I think the Jackdaws are looking for fat and juicy Insect larvae.