Last Friday I went down to Sussex prior to going off to East Devon with Mum for a wee holiday.

On the way down I stopped at Warnham Nature Reserve which played host to two pairs of nesting Common Terns but little else.

Damselflies were more numerous than birds... 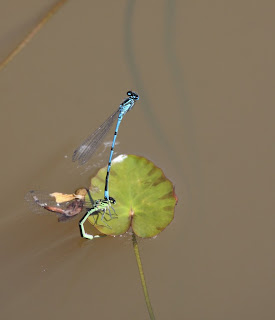 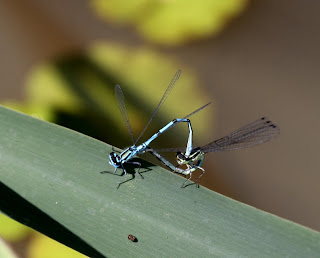 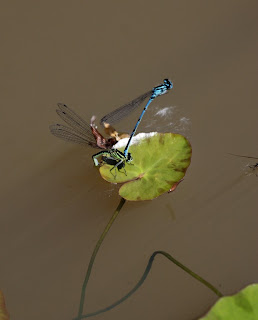 We set off during the morning on Saturday an encountered quite a bit of traffic but not too bad. Arrived at our destination to a very warm welcome from our hosts. We've stayed here on previous years and can't recommend it highly enough. I will post links on my return.

I'm using the internet connection and Mac computer supplied within the accommodation; for which I'm very grateful. However, it's rather like trying to undertake 'normal' things in a completely different situation. Where are the files downloaded to? How do I use this software LOL Let's just say it's a learning curve which although I'm enjoying is taking me a tadge longer to do the basics than I'm used too!

The birds here are numerous. Just above our front door a Wren is nesting. We also have two Spotted Flycatchers (Pete please note - I got it right this time.) I don't know it they're nesting but they are often seen in this tree and tend to stay in the same area. I haven't got more than a record shot yet but there's plenty of time! 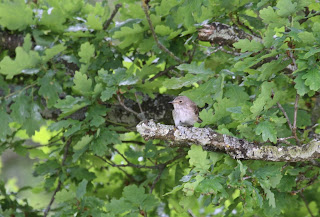 Yesterday we had a very close encounter with a young Robin which came in through the front door. Eventually it calmed down and, as I'd opened all the windows, it could find a way out.

Swallows are nesting again in the eaves of our barn and swoop over the ponds feeding. Also seen are Goldfinches, Blackbirds, (nesting) House Sparrows, Robin, Chaffinches, Greenfinches and we have a Chiff Chaff singing in a very nearby tree!

Our nearest neighbours are bovine and live in a buttercup-filled field behind our converted (but luxurious) barn. 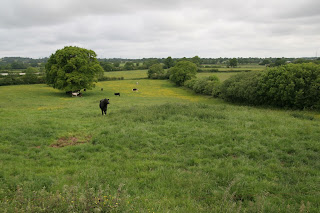 This unique sixteen-sided house, described by Lucinda Lambton as having 'a magical strangeness that one might dream of only as a child', was built for two spinster cousins, Jane and Mary Parminter, on their return from a grand tour of Europe in the late 18th century. It contains many objects and mementoes of their travels. The extraordinary interior decoration includes a feather frieze, gathered from native game birds and chickens, laboriously stuck down with isinglass, and a fragile shell-encrusted gallery, said to contain nearly 25,000 shells, which can be viewed in its entirety on closed-circuit television 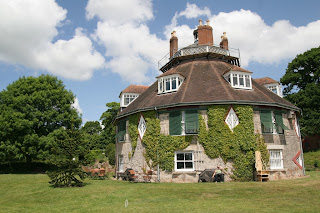 Turning our backs on this amazing house, we could see the Exe Estuary in the distance. A good birding spot but that will have to wait for another time. 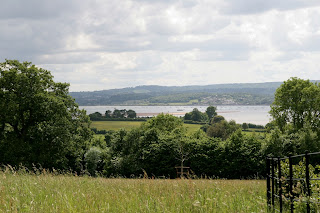 Down in Exmouth further watery views. 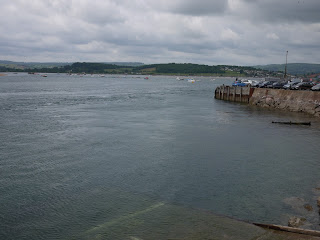 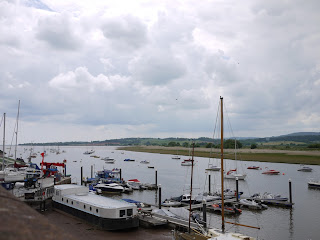 Only a few pictures as this seems to be taking a considerable amount of time.

And the weather for the coming week? Winds from the North East (rather cool) and rain with possible thunder storms. Oh joy!!

This blog may be idle for a while at this rate....

What a wonderful start to your holiday ~ here's hoping the weather will cooperate! A change of scenery is always a treat and I look forward to further photos and posts. A la Ronde sounds magical indeed, and it would be interesting to know more about the lives of the two spinster cousins! I'm sure you'll enjoy yourselves :)

Great pictures. Sounds like you are both enjoying yourselves. That house is fabulous. I'd love to see inside it.

curiously I have never been to a la ronde. no photos inside?

not been that bad a day here. although the forecast doesn't look that good does it SIGH

oh don't forget next sunday is open gardens so you can head to bushy house!

Glo - it's been good so far and this is only our first day. A La Ronde is really intriguing. Apparently it could only be 'willed' to females (this was determined by one of the two sisters owning the house) who were single. In that if they married and predeceased their husband then the house would pass to males - something that should not be it seems, as only females were able to inherit!

Pete - it's quite fascinating but tiny rooms and a wickedly dangerous spiral staircase. It's worth a visit and the views are stunning!

and next Sunday is earmarked for just such a visit :D

Wilma - it really is idyllic and I would recommend it as a great escape!

Sounds like a great place Tricia. And that round house looks very interesting.

Keith - the Roundhouse is fascinating; the very top floor is closed to all, even the volunteers..; completely shell lined walls and all very fragile and dangerous now.