and did the Canada Geese fly?

Despite the very dull weather, I went back the following day at around 5.00 p.m. and lo and behold not many minutes after that the Canada Geese (and the lone Greylag Goose that hangs out with them) flew off in two flocks separated by a few minutes.

Now, I'm trying to learn and improve on my "moving subjects" photography skills and, as you will see from the following, I've still got a very long way to go. My only excuse was: I hadn't prepared the camera properly and the light was dreadful! 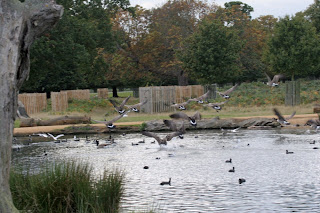 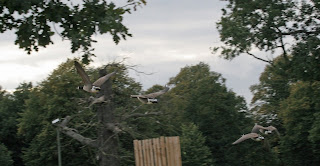 This morning found me back again but this time looking for the "main man" of the Red Deer rut. The "main man", whom I've named Henry, was certainly strutting his stuff, keeping a constant eye on all his Hinds and chasing off would be contenders. Why Henry? - well a) he lives in the shadow of Hampton Court Palace b) he does have a great number of ladies around him! and c) it's the best I could come up with.

Rather obligingly he does seem to be staying in the same place; not the best of places as it's running along-side the only road through the park! 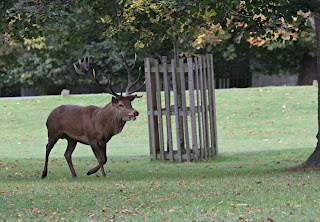 Seeing off a would-be contender 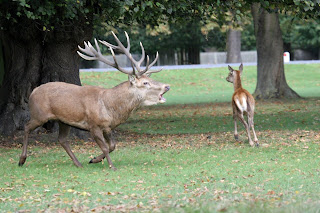 Just for comparison, this is a much younger Stag who kept well out of Henry's way! 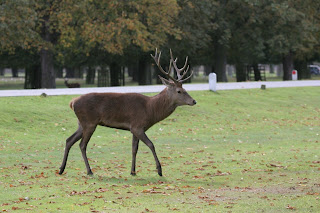 It was wet and very windy this morning so again dull light. That regardless, I did attempt to photograph flying birds - this time black-headed gulls! And with mixed success - I'll let you be the judge. 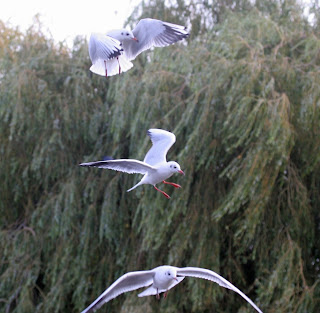 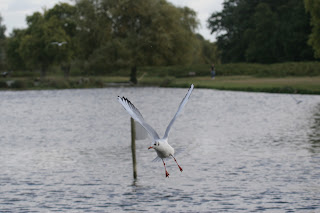 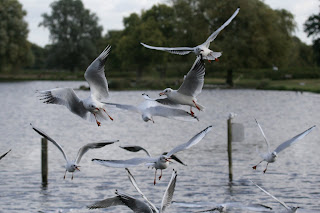 Tricia. I know you don`t get the same results, but i prefer to take flight shots against the sky. So much easier for the camera ( focus ) to lock onto the subject.

These are`nt bad for your first attempt.

Thanks Dean - I would agree. Anything other than sky is too cluttered.

Regrettably those that were against the sky were: rubbish!