Life in the Pond

Last night (24 February) I was sitting reading when I heard - frogs croaking or, more descriptively, purring.

I looked through the window but couldn't see anything despite the outside light. So..... torch in hand I crept quietly towards the pond. Two splashes were heard as frogs dived back into the water. Further examination revealed four frogs of which two were a pair! Will there be spawn by the morning I pondered.....

This morning just as dawn was breaking (albeit the sun wasn't rising and, as I type, still hasn't risen!!), there was serious activity and movement in the pond in four separate locations. The frogs were under the water and in the semi-gloom I could not see them BUT what I could see was the first "blob" of spawn.

It got a bit lighter and I realised that the one blob of spawn had become two: and this frog was having a rest! 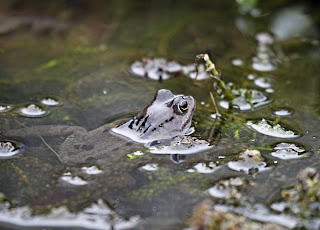 I went out to do some food shopping and then returned for a quick sandwich. By now it's early afternoon and sitting eating my lunch I noticed that two had become three blobs: 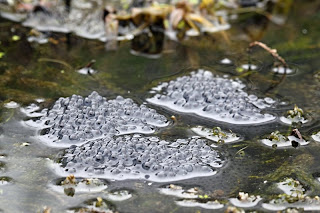 A short while later and again there was much turbulent movement in the pond which, on further investigation, revealed this group of frogs. I know there are at least three frogs involved but........ there could well have been more. 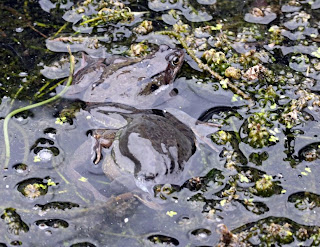 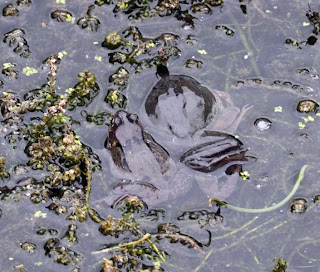 It's interesting that in 2007 the first spawn was produced on 20 February and in 2008 it was later and on 25 February - this may have been later as there was still ice on the pond around the 20th.

Email ThisBlogThis!Share to TwitterShare to FacebookShare to Pinterest
Labels: Wildlife

Is your pond large? I'd like to build one but don't want a huge pond - would rather have a number of smaller ones in slightly different habitat so they attract different wildlife...

Tricia - The difference in dates seems to show how much colder it has been this Winter. No sign of any frogs in my pond yet this year.

Liz - I used to have a small moulded plastic pond less than 6 foot by about 3 foot and narrower in the middle. It was home to frogs and newts for many years.

Liz: the pond is a semi-circle with the straight edge being 7ft and the curve being 5ft at it's maximum. It has two shelves - one along the outer edge about 8 inches down and another at the curved "beach" end about 10" down. The deepest part is approx 20". I consider this to be a small (?) pond.

I'll see if I can find the pictures taken during its construction.

John - I'm sure different regions of the UK are going to cause different "spawning" dates too. The spawn was the same time as last year and we didn't have it nearly as cold as this year.

great news Tricia.I have just dug a new wildlife pond and have seen two frogs but as yet no spawn.Of course it is a lot colder up north.I eagerly await progress

Fingers crossed for you Sheila. My pond went in in May and the frogs spawned the next Spring so there's every hope that yours will too.

Very nice. I have heard frogs called the 'canaries of the environment' so you must have a healthy environment in your garden.

Looks very exciting. We don't have a pond in our garden but it is something that I would like in the future. We do have the occasional frog in the garden, but it must be pretty amazing to watch all the breeding action unfold in your own pond. Maybe pond-building is a job for the summer! Thanks for sharing :-)

Great shots, nice to see another sign of Spring.

No pond in our garden either, something to look into this year I think.

Mick - it would certainly seem so.

Joe - A pond brings huge interest to the garden so thoughts for the future..

LBJ Paul thanks and - I'm sure you wouldn't regret a pond :D