A longish walk and some plant ID please?

Yesterday, despite the very cool and misty start to the day, a friend of mine and I went to Polesden Lacey.

We walked well away from the formal part of the garden and walked down the hill and through farm and woodland. Obviously once you've gone down you have to come up again but it was really great cardiovascular exercise!

Walking through the woods, apart from the normal suspects, we came across a Treecreer. Down by one of the farms, a Green Woodpecker bounded away whilst we watched a Wren popping in and out of the reeds next to a small pond.

We then fortified ourselves with a sandwich and drink before wandering around near the house and finally heading off home.

About 1/3rd of the way around, we looked across to Polesden Lacey House which had been our starting point. 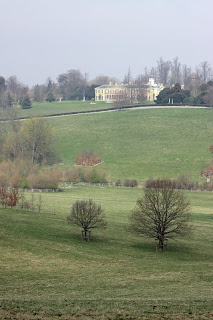 In a field, we espied this snail - I think the snail may have been out though.
It measure approximately 1.5 inches across (i.e. from left to right) and was considerably larger than most snails I've seen. Any ideas as to what it is?

Thanks to John and Graham's, suggestion it would appear to be a Roman Snail. 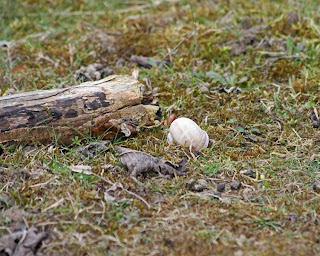 Equally we found this plant growing in the wilder parts. It looked rather like a Pulmonaria?

and thanks to Steve Gale for identifying this as Creeping Comfrey (Symphytum)
So that's two things I've learned today - ain't life grand! :D 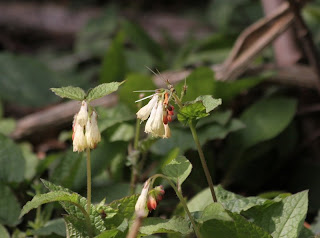 This tree was about to blossom - no idea what it is. 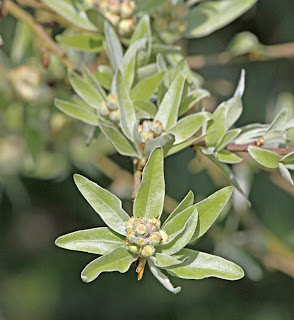 And Aubretia tumbled down walls. 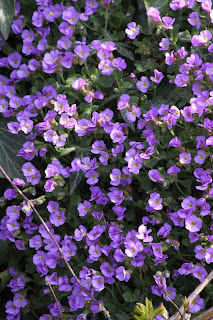 A Honey Bee was enjoying the Clematis
(if you click to enlarge you can see the large amounts of pollen it's gathered on both legs!) 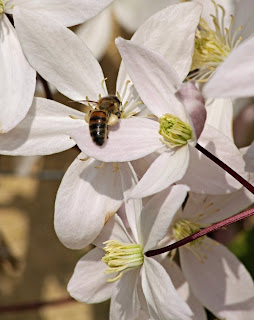 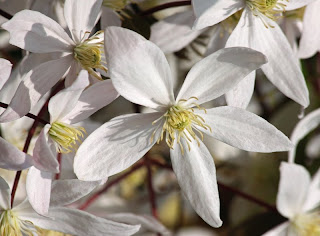 Ceonothus basked in the sun along a wall of the house 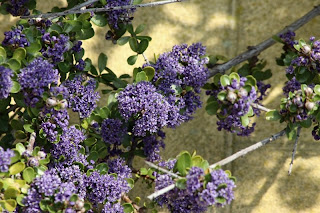 and this pink blossum was a cheery sight against the, now, blue sky! 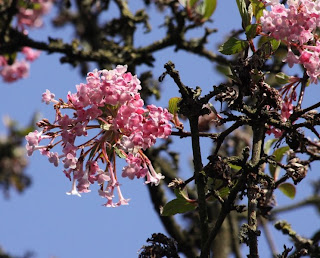 and Tulips rose proudly against the wall. 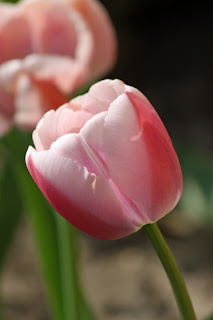 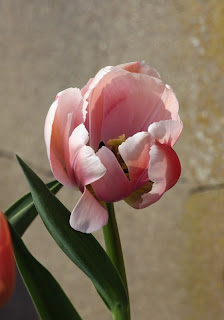 Hi Tricia,
I think the snail shell is just from a Garden Snail and has been washed out by the weather. No idea on the plants, sorry!

For the snail my farthing is on it being a Roman Snail.

Have a look at the description at

and see what you think.

Billy - thanks for your suggestion :)

Steve - thank you for identifying this. A very pretty plant.

Hi Tricia,
I'm so jealous now that you can go out. here the wind is terrible and there is no way to go out birding or taking pictures.
Have a nice week end.

Hi Tricia, A very nice outing, I particularly liked the first Tulip photo.
Could your mystery tree be some type of Rhododendron? I'm going by the leaves and I know there are many different types from small shrubs to trees over 30 metres tall. That's my best guess I'm afraid and maybe totally wrong!

Not able to help with the ID's Tricia I'm afraid, but like looking at the lovely flowers and colours.

Chris: Sorry you're not having good weather. Today (Saturday) we now have rain and grey skies so don't think my camera and I will going anywhere today! A good weekend to you too.

Graham: Thanks for that - post will be amended accordingly now.

SS: I know why you suggest Rhododendron but it didn't have the shape of one; I will be going back before long so I'll try to get a picture of the whole tree.

Roy: It was a colourful day.

Keith: Thank you - I must admit I was rather pleased with the tulip pics.

Hi again Tricia, another beautiful day for your walk I see. It has been glorious here too. Wonderful images as always :-D

This morning it is duller with light rain here but my plants will be more than happy with that – especially the ones in pots like my Weeping Silver Pear tree which I do believe is what your mystery tree is. I’ll try and get a photo of mine (which will still be a couple of weeks behind yours). Just this week the leaves have been uncurling. It is a wonderful contrast against my Leylandii hedge.

I loved seeing all your blossom shots and the tulips too. It’s wonderful to see the bees again. Spotted a peacock butterfly the other day too – now we just need to see moss coming into the camera nestbox next :-D

Have a great weekend :-D

Shirl: Raining here too but very gently. What would be called in Ireland "soft rain"!

Thanks for you help in identifying the tree, but having googled your weeping pear and I think I have to rule out that one as the leaf and tree shape are very different.

I'm definitely going to have to go back and get a picture of the whole tree; perhaps one of the gardeners there may be able to help if necessary!

What joy there must be in having a long growing season like you appear to have. Still snow on the ground here. Lovely pictures as always.