This morning it rained!! Whilst we haven't had much rain for a while and the garden is, in fact, quite dry it was still a tad irritating. Only because instead of getting out, I had to give in and catch up with some long overdue housework! (Sorry to use bad language here!)

But by lunch time the sun was shining so I went over to the LWC at Barnes.

Snakes Head Fritillaries greeted me on arrival, bobbing their heads in a gentle breeze. 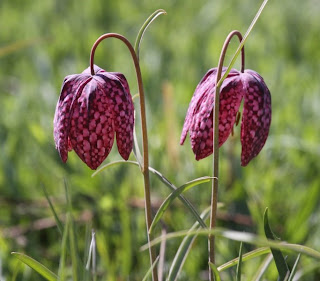 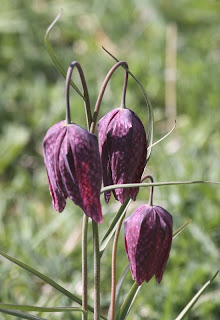 A pair of Little Grebes were ducking and diving
(and swimming straight into the sun!) 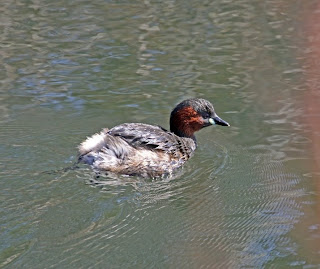 Whilst this Kestrel entertained high overhead. I'd been focusing on it for a while (not easy) when it turned its head and looked straight at me - or probably this very big glass eye peering up at him
(I'm saying him but is it a him or her?) 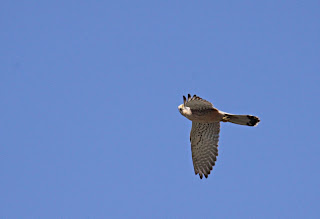 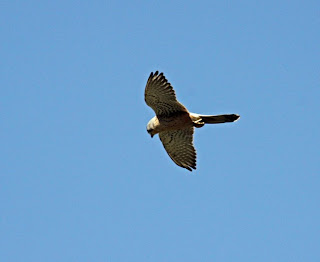 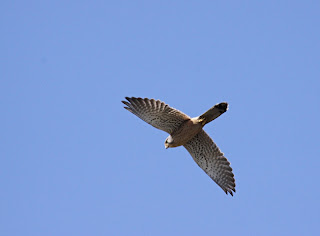 Later on in the afternoon this one was perched in a tree - I believe it to be the same one which had been around for sometime. 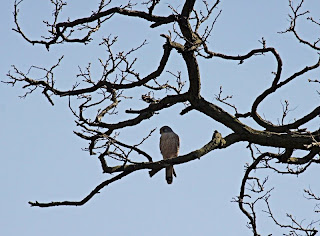 A comma butterfly was on the catkins again 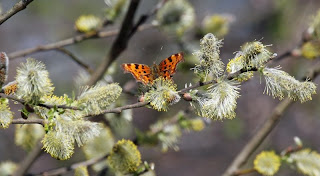 Whilst a Green Woodpecker hid under the bushes looking for ants 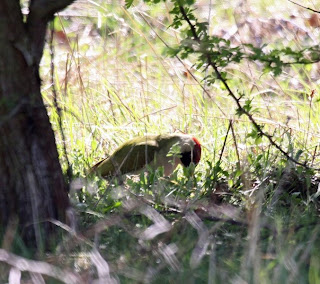 Just as I arrived at this spot, I was greeted with the usual "10 minutes ago.....you have just missed... five lizards who were sun bathing on a log. Later on I managed to get this shot whilst lying almost full length on the ground! 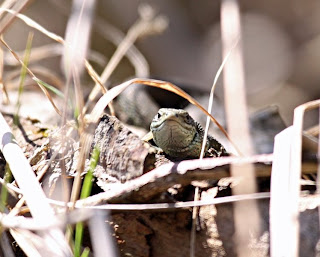 Dreadful picture but my first Coot chic of the season/year 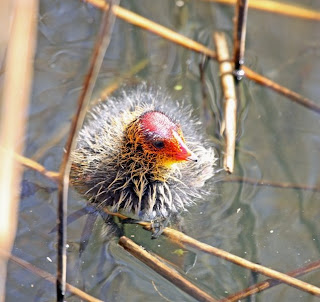 Done and dusted I went home for a very quick visit to Bushey Park.
Sadly I couldn't see the Great Crested Grebes anywhere and a Coot was firmly in residence sitting on the nest. Hey ho!

But the Cob Mute Swan was having a late afternoon wash and brush up! 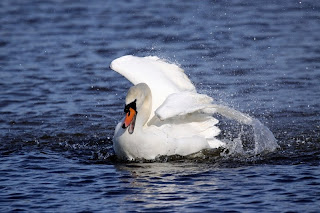 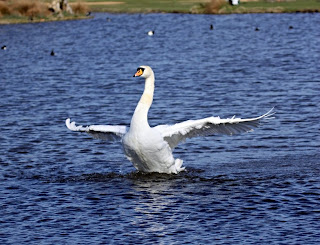 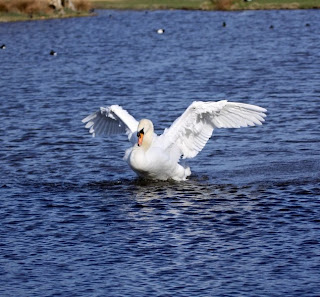 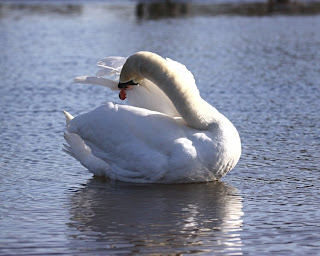 Lovely photos Tricia, and you beat me to the Fritillaria! I was going to post some later, oh well :D

Lovely photos, and love the Lizard :)

Hey Tricia, that Dabchick is perfect.

Bad photo or not - I loved the coot chick! And of course the swans are always elegant and you have some great photos of them.

The Coot chick looks as though it is having a bad hair, should say feather, day.
Re lizard - some people will go to any lengths to get the shot. Did the same thing myself last Summer to get some movie of a young hedgehog.
Love the bird action shots.

A good day by the looks of it.
Nice Lizard shot, worth the lying down. I saw a few Brimstone Butterflys today, and had to rescue a Holly Blue from my pond when I got home.
Don't those Coot chicks look strange? They just look so wrong to what they will eventually be. lol
Thanks for the help with the pictures; I think it worked :)

Hi Tricia,
A lovely day for a lovely message. I love the little grebe picture a lot. I've never seen one. I love the coot chick too, he is quite funny. A really nice post and day. Congrats.

Liz: They're such charming flowers and I look forward to seeing yours.

Roy: Thank you! There were two of them but they wouldn't pose together. Such great little birds aren' they!

Mick: They are such weird little things until they start to get their adult plumage.

John: think you're right about the bad hair/feather day. And "lengths" is the operative word and it was a very warm day today :) Lying in snow loses some of the appeal however!

Keith: A holly blue already? Great stuff. Yes, it's difficult to imagine that young coots will turn out to be such sober looking adults!

Glad to be of assistance :)

Chris: Thank you. Little Grebe are small diving birds and can swim some distance under water. You never quite know where they are going to pop up again!

Manchester Lass, Now and Then said...

I always get a warm fuzzy feeling when I read your blog. I can be guaranteed to have a smile on my face when I have finished reading your blog. Just beautiful Tricia. Thank you so much for sharing your world. Linda

Linda - Thank you for visiting and for your lovely comments. I'm glad to have made you smile; that makes me feel good.

Where to start Tricia!! those photo's are beautiful. Your Kestrel looks like a female to me.
Those flowers? i have never seen them before, do they just grow wild? excuse my ignorance! you made them stand out so well with the blurred background. Its so hard to pick one photo out there all so good.

Wow and double wow, some wonderful shots there, loved the Coot chick and the Kestrel hovering, well done and thanks for sharing!!
Jayne

Hi Jayne: thanks for your very kind comments - I was rather chuffed with the Kestrel shots - best ones I've had to date.