Life - from a different angle.

Today in the garden the Brambling was missing but two Lesser Redpolls were still present. Great stuff!

I nipped into Bushey Park despite the damp grey and decidedly inclement weather. The Grebes were conspicuous by their absence - I do hope they've not disappeared completely!!

A couple of week's ago I met a fellow photographer, Richard Peters. Richard has an interesting blog, a website and some interesting and helpful tips for photographing wild life. We're both still trying to find the Grebes in Bushey Park.

So today, I decided to emulate him and try some very low level shots.

Well, in principal, this is an excellent idea. Richard uses a bean bag to support his camera when shooting from a low angle - this is something I don't have. However, on the basis of "nothing ventured, nothing gained" and given that there were not many people about to observe me.....

I decided to get some shots from the bird's level, so to speak. So lying prone on the ground, with my camera balanced in my left hand and left elbow firmly on the ground, I started to take photographs. The passers-by glanced at the mad woman lying on the ground in slightly damp weather and moved on quickly!

It's really interesting how different the birds look at their own level. The light was dreadful, the sky grey, the atmosphere damp - to say the least; the results of my labour?????

I took this in an upright position (me that is, not the Canada Goose!)

Up in the same tree I'd seen him recently, this Reed Bunting was still singing away... 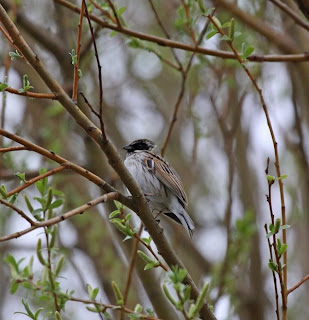 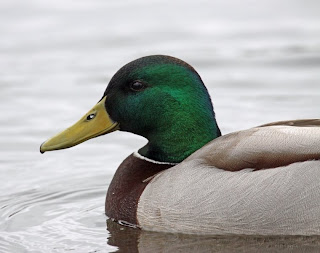 Tuftie trying to ignore the wind! 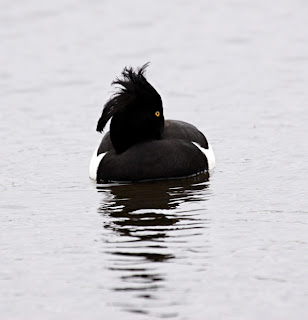 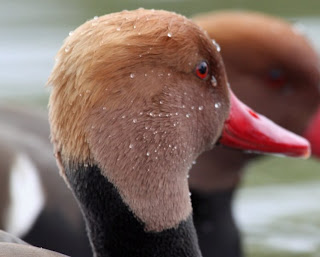 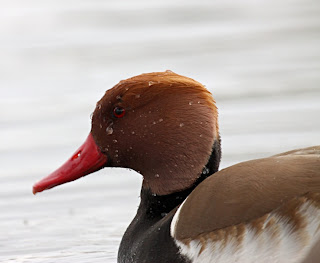 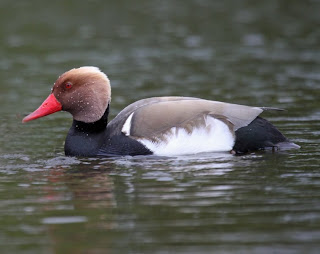 as did this one (of four) Egyptian Geese Goslings 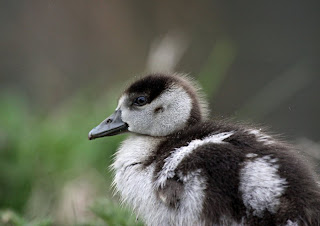 Not quite such a low position, but this Cob Mute Swan was moving weed from the edge of the pond, into the pond! 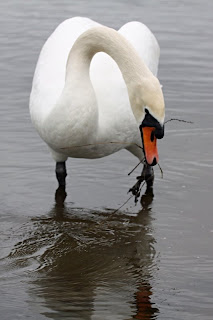 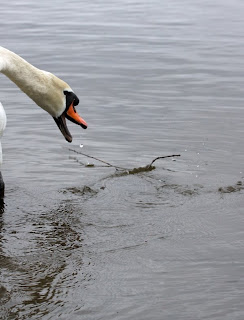 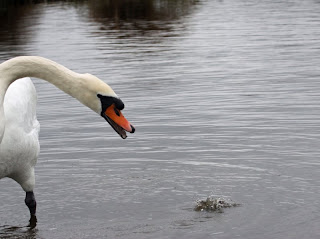 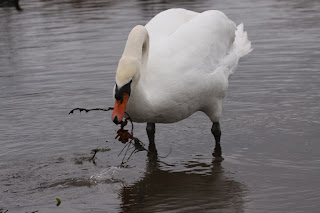 Ah well, a short trip out and an experiment which I shall repeat.

Yep, the Grebes have been a bit quiet recently. I went the day before yesterday and only saw one bird, sleeping in the middle of the lake most of the time. I hope everythings ok with them!

now you know why I made the comment about Phil at Uppark, when he is 6 ft tall. 14+ stone in weight and since his op not so mobile!
The Pochard and the Egyptian Geese Goslings photographs are great, well worth getting down and dirty!!Lets hope the weather improves for the weekend, we are hoping to go to Windlesham Arboretum and Osterley Park tomorrow.

Have a good Easter weekend, Jackie.

Lovely close-ups Tricia.
I like to see photos from different levels. I think many of us spend a lot of time shooting from human eye level. Even sitting or crouching down gives a different perspective.
Now - off to the chemist with you and get some stronger cod liver oil capsules to oil those joints.

It is a great tip, Tricia, and your photos prove it's worth the effort.

Well worth the effort Tricia, but watch out you don't get arrested for lying down on the job! FAB

Mum i have a small bean bag you can have but summer is on its way low levels shots are easier when lying in daisies with the sun warming you! Ooo i could borrow a hoist from work if you like!! hee hee LOL spd

Billy: between 3 of us hopefully we'll keep up with what they're doing!

Jackie: Thanks.... Compared to Phil I have NO excuse!! Happy Easter to you both.

John: Thank you. I've often knelt down to take pictures (as my grass stained trousers will testify) but lying down is a new experience.

Not sure whether I should ingest the cod liver oil or use it as embrocation!

Graham: Thank you. I'll expect you to demonstrate expertise in this area with your camera too :D

Frank: Thank you. And I shall try to stay out of the way of the Park Constabulary.

SPD: thanks; I'll take you up on the offer of the bean bag and would relish the daises and sun. But that was a very cheeky comment about the hoist!!
(don't put it away yet though - just in case)

Great photos there Trica. I find the low down/eye level shot very effective and pretty much always try and get at least some eye level shots of the animal I'm photographing, though thats not always possible of course!

Thanks Neil. At least with (hopefully) dryer and warmer weather approaching it won't be too uncomfortable. And you're welcome re the link.

Great to see you getting in the low level practice...don't worry about other people thinking your crazy, it's the ones that think you have collapsed that you have to worry about (yep, I've had people come up asking me if I'm ok lol)!

Nice one Richard - hadn't thought of that; good to know people are concerned though.

Lovely photos again Tricia and amusing post too. You were very brave not only with the prospect of having to get up once you were down, but also with not worrying about onlookers, especially with onlookers watching as you were trying to get up if you follow me...!!!

Hi SS: I certainly do follow you; I was glad not too many people were around to witness my antics!

I like the new angles for the photos. If you ever find a way to get way down like that out in the middle of a swamp with several inches of water please let me know! That's the one place I am still trying to find a way around!

The Red Crested Pochard images are absolutely brilliant, well done. Another duck I have not got close to as yet. Superb job.

It does make a big difference when shots are at a low angle; not always easy though.
The Mallard head and shoulders along with the second Red Crested Pochard shot are my favourites there.
Have a good Easter.

Thanks for sharing that web site, some great advice on there. Shooting low really makes a difference, especially on the water. Love the shots of the Porchard.

Mick: how about a raft? Sorry but I haven't much experience of swamps around me Lol

Roy: I know! Whatever next!! And thanks; the RC Pochards are strange birds with those big heads!

Keith: Quite a difference to see birds at "their own" level. Mallard heads are so photogenic. some sun would be nice to really bring the colours out though. I'd have like the shot of the RC Pochard to have been a bit sharper though.

Paul: Thanks. Richard has some great advice and hints so a site well worth following.

Great Grebe photos Tricia. I'd love to see a Reed Bunting again. Have a good easter, and enjoy the quicksilver bird challenge if you are taking part

Great photo's of the Pochard from a birds eye view.

Hi Joe: thanks. Reed Buntings are such songful birds! Good Easter to you and yes, I hope to take up the challenge!