Picked J up from school and then home for him to change before we went for a walk in Bushy Park. The sun was shining and it was warm - great!
I was checking on the remaining 7 Mute swan cygnets and they were all there and accounted for.
And there's a happy outcome regarding the "missing" 8th cygnet. I fell into conversation with Tom and Jim (Police Community Support Officers) who were patrolling the park on their cycles. They are operating a "safe park" scheme which I might become involved with.
Regular readers will have seen my former post (a couple of weeks ago) about the cygnet not looking at all good, out on the pond on its own and obviously not able to move. This picture shows it at that time. It had (as I had feared) been caught on some fishing line and couldn't move from the spot. The good news however, is that it had been taken to the Swan Sanctuary (not far away) where it is still being looked after - Phew!
This was the cygnet unable to move! I'm so pleased that's it's now being looked after and that the man fishing took the appropriate action to let the Park Ranger know of the bird's plight! 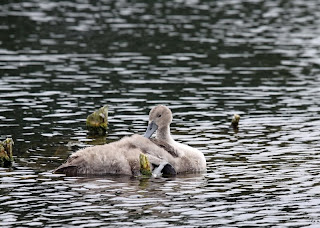 Here one of its siblings (today) just beginning to show a glimmer of white.. 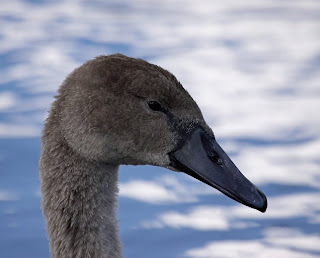 and nearly a complete family (the other parent and youngster being out of shot!) 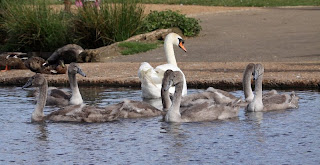 Whilst looking for something completely differnet, I found this video footage of the whole family on YouTube - filmed by someone else and unknown to me. If you watch it till the end, you may feel like applauding!
In excess of 40 Fallow deer today in two different groups. The colours of these deer varies from all cream, through the beautiful dappled colouring, to this very dark brown. Deer coloured such seem to be in the minority! 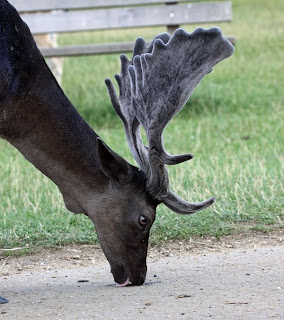 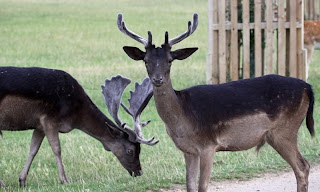 The three very young Egyptian Geese Goslings were swimming around - they are so much later than all the other wildfowl families! 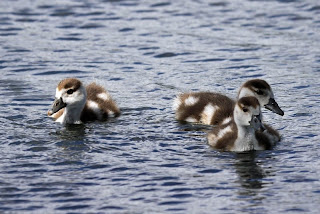 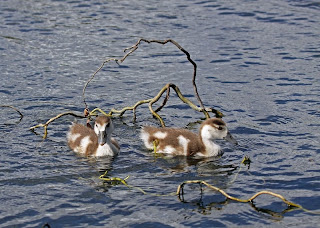 On the usual "Cormorant" island (my choice of name), one of the normal three was sunning itself and trying to keep cool! 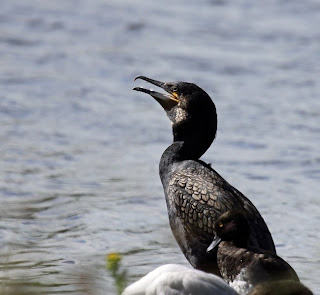 At its feet were two Tufted Ducks and a Black headed Gull! 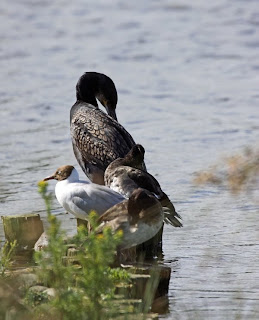 This Red-crested Pochard was not very "crested" today and the red was confined to just its beak. Looks a little sad (colourwise) as it goes into eclipse! 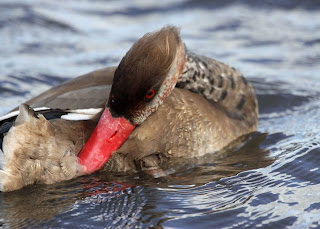 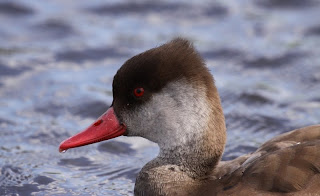 Now I don't know what this is but its often on the pond - it too is beginning its summer moult. Its normally on its own and I've never seen more than just the one.
If anyone can help with the ID, I'd be very pleased! Whatever it is, it's a very pretty bird! 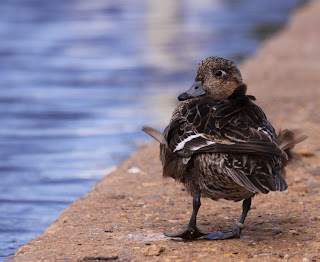 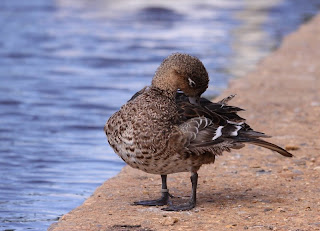 and....no homework tonight and hopefully (as it's the last full week of term) there won't be any more this week :D

Lovely post Tricia; and what good news about the cygnet. Hope he makes a quick recovery.

That video clip was excellent. Such determination by the little things. I almost wanted to give them a helping hand half way through. lol

Great that someone was watching for that little cygnet that was caught! I like your photo of the swan family. btw I think that parents and grandparents think more about homework than do children :-)

Lovely pictures Tricia. Glad the signet is ok! Love the video, and yes i did want to applaud! The deer are very beautiful too x

Impressive antlers on the deer!

That's great news about the cygnet.Surely he will recover soon.Lovely post with nice images.Great video, deserves an applaud.

Just read this and your previous post Tricia, those Parakeets in the previous really do look like someone's cage is now empty, very pretty birds.
Loved the video and once again some enviable shots to enjoy once again
Jayne

Lovely set of pictures Tricia. Nice to know that any birds in trouble get a helping hand. Maybe the eight will be together again soon.

Such good news about the cygnet Tricia, I'm so pleased! We got fishing line wrapped around our legs at a local lake recently, I was able to extricate myself easily and Louis luckily managed to avoid it altogether but it took some time for HLH to unravel it from himself, he was determined to collect the whole piece and take it home to dispose of safely, he seemed to be following it all around the lake! It is such vicious stuff and people are so thoughtless!

I loved the video and yes I cheered! :)

Keith - fingers crossed for the cygnet. I know what you mean about offering a helping hand!

Mick - the homework is now getting beyond my expertise!!

Karen - thank you. S/he's in good hand at the Sanctuary.

Janine - it's the "right" time of the year as they are the new antlers grown through Spring and Summer!

NatureStop - I agree about the applause - I was holding my breath towards the end - phew!

Jayne - I would agree about the "cage being empty"; it would have to be a very large one as there are a few thousand in the South East of England!

Jan - Ironically, it was one of the fishermen who contacted the Park's authorities to let them know about the injured cygnet! Nasty stuff - fishing line!

John - thank you. I would like to think that no. 8 would be reunited. I suppose it depends on the extent of the injury though.

Hi Tricia, your mystery duck is an eclipsed plumage Wigeon. I have named her Ruddy. She has been present there for a couple of years now and always comes up to me whenever I see her! The link takes you to my first encounter with her...

Hi Bill - many thanks for the ID. Now you've told me what it is, it's obvious!! I didn't realise it had been around for so long so I shall keep my open each time I visit now.

Had a look at your pics of the Wigeon - nice!!

"These yer" fallow deer are a bit of a mystery. In the wild you normally expect to see brown coats with white spots in the summer and turning dark brown to black in the winter. That's been my experience anyway.
Apparently there are four variants of Fallow. 'Common', 'Menil', 'Melanistic' and 'White'.
I understand you are more likely to see all of them mixed in larger Park herds.
"Not a lot of people know that."
I had to look it up. {:)

Well Roy - a few more people know that now - thanks to your research endeavours :) I think I've seen them all but I shall look more closely next time.