Great Crested Grebes - at last some young ones!

I've been missing from the blog scene for over a week it seems - had various family commitments and the camera has been gathering dust and I've been getting very (camera) twitchy. So I was delighted when I received a heads-up from Tim about the four youngsters that are there now.
Given the failure rate of the broods of Great Crested Grebes at Painshill Park, it's amazing that there are now 4 youngsters of one of the two pairs that are there. The other pair had their two predated and haven't really got it together again to produce any more.
I was meant to be food shopping but as soon as I got the text from Tim I headed over - and was well rewarded.
The water reflections and stipeyness of the little ones made taking pictures quite a challenge but I did manage a few; albeit some of them just record pics.
I sat on the bank and watched them for well over an hour. Mum and the four siblings stayed more-or-less in the same spot and during all this time, Dad was frantically fishing and feeding the young.
Just a few pics..
(they look marginally better when the pictures are enlarged ;) ) 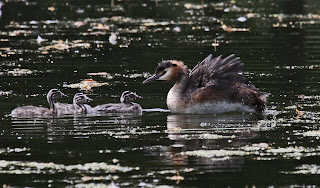 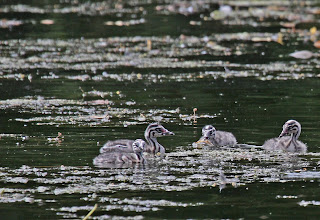 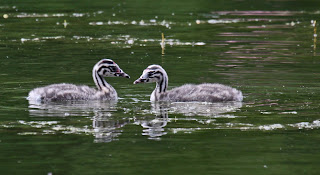 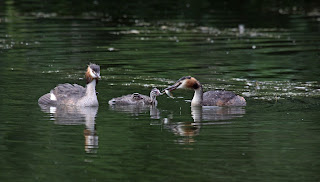 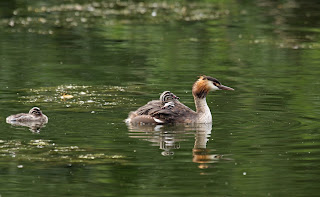 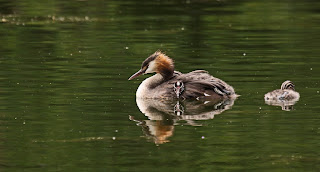 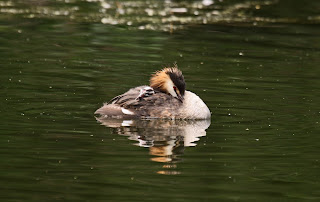 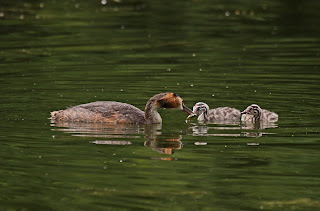 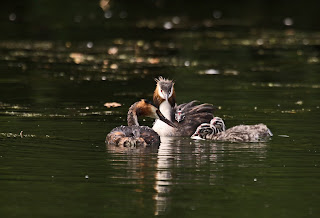 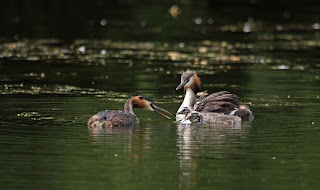 This fish was so big I didn't think the youngster was going to manage it but... it did! 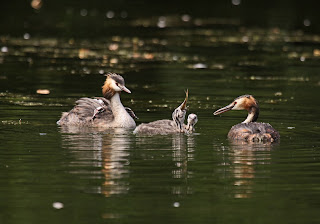 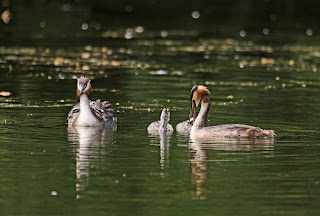 Quite a few dragons about but this Black-tailed Skimmer landed briefly for a photo call. 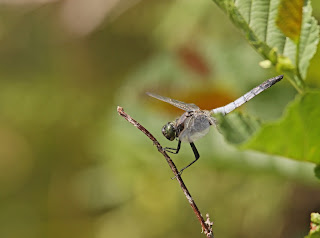 As we advance through the summer, some of the flowers are not going to seed but looking very pretty as they do. 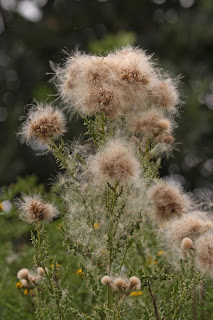 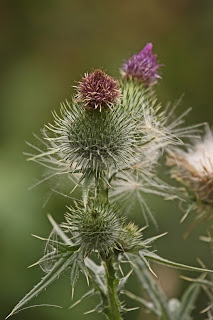 And just a few flutters around... not that many. It was warm with a fairly cool breeze today and at one time, just sitting still, I was beginning to feel quite cool. 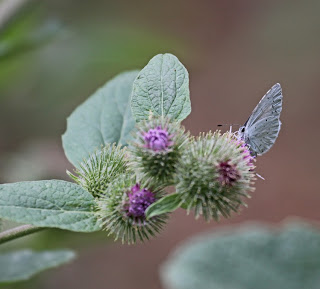 A Bees was kept company by a hover fly and other flying wee beasties.... (pity I hadn't really noticed them until I processed the picture!!) 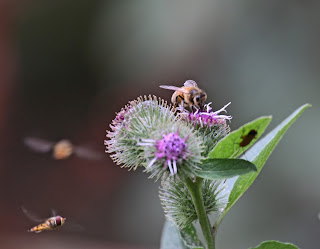 Well tomorrow will probably bring more domesticity but hopefully I will get out and about somewhere wilder by mid-week!!

Great news about the great crested grebe youngsters and the photos are super. The young definitely have the "aah" factor. Love the seedhead photos too.

I think Great Crested Grebe babies are gorgeous, with those amazing stripes! You did a lovely job with the photos :)

Hi Neil and thank you :d

Hi RR and thank you - I think four youngsters is the most I've seen reach this stage in the few years I've been watching wildlife at Painshill. There's quite a high predation rate and last year, despite 4 eggs being laid, none even hatched!

I'm hoping these have a chance and will be around for sometime now.

Gaina - thank you. I'm always amazed at their "stripeyness" and the red mark on their foreheads...

I so enjoyed looking at the grebe family photos, especially of the young one caught in the act of fish swallowing!

Great photographs. Love them all.
Costas

How exciting to see four Great Crested Grebe youngsters and watch the family interaction. Gosh, that fish was a huge mouthful! Good capture ... so did you get your food shopping done afterwards to enable you to feed your family ;)

Now that you have mentioned it Tricia, I haven't seen as many GC Grebe young this year either. Don't know why that is.

Wow its amazing he managed to choke that fish down! Great series.

The call of 'domesticity'....a right pain at times lol
Cracking shots Tricia, and good to see the little 'humbug' babies around.
Some of these dying plants still manage to look quite beautiful don't they.

Costas - thank you as usual :D

Glo - I loved watching their activities and wondering if it would get the whole fish down; only me to feed and yes I got something for my meals lol

Roy - so many have been predated at Painshill but that's fairly normal for there.

I love all plants but seed heads are so beautiful as you say, and bring a whole new dimension.

Lovely family photos. Can always rely on you and the grebes to supply the Awww factor Tricia.