Sunday dawned reasonably sunny after a Kent night of gales and rain. Having seen the Night Heron, albeit well tucked away in the reeds yesterday, we decided to head off after breakfast to try for a better sighting. So having got there just before 9 o'clock we wandered along the canal path. Saw a Great Spotted Woodpecker high in the trees and heard a Green woodie; blue tits, robins and chaffinches seen, as well as Moorhens, Coots, Mallards and the Muscovy Duck!

We got to the dam and our first "spot" there were four "birders" - this is quite a common species and mostly seen in their green winter plumage; occasionally you might see the face peeping out from (usually knitted) headcoverings! This particular group were carrying additional "eyes" which add distance to the range of their eyesight! We then spotted our target bird - the Night Heron. Again, hidden in the rushes, in the shade and very still. I got off an initial shot which only just showed it's beak - 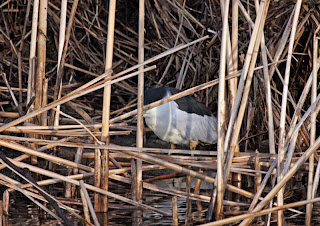 so I moved a little further around. It had also moved - very slightly. 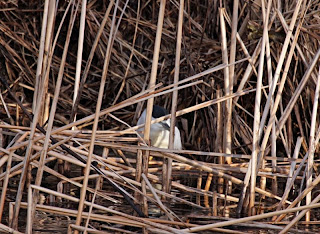 Having gone through the field's gate, I moved a few feet further along and managed to observe it better from this angle. 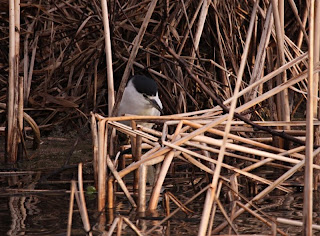 Pity it was so still and, given the time of day, not searching for food but hey - I saw it and got a record shot - whoo hoo!!

Pete and I then headed off in our respective directions and, home by lunchtime, had a sandwich and am now contemplating the sun and...
Posted by Tricia Ryder at 1/18/2009 12:26:00 pm

Looks as if you had a good trip Tricia. Congrats on getting the Night Heron.

not only do I enjoy your photographs Tricia but learn new birds all the time,never knew such a bird existed.Thanks
Sheila

Thanks Frank - one for the life and year list!!

Sheila, thank you and I'm glad you're learning. That's the wonder f visiting many peoples' blogs! The Night Heron is not a native bird and it's unusual for it to be where it is and for so long!!

Great that you saw the heron and got photos as well. In that habitat it would be hard to see at all!

Mick - on our first visit, we looked hard for a long time and didn't find it until the last minute! It was so well hidden.

Looks like you had a great weekend. Beautiful pictures as always.

Thanks OC and yes - 'twas a great weekend..