Last January (2008), a bird-ringer visited my garden and ringed several birds. One of which was a robin and, I believe, was my regular robin that my grandson and I named "Mr. Chips". I've had two robins visiting recently, one of which keeps me company in the garden - albeit from a distance and the minute I move, he's off. Today was different.

I've been gardening all day - I ache all over - but I got a lot done and enjoyed it. And I had company. Now today's robin was ringed; he also kept very close to me (sometimes he was only a couple of feet away and not at all concerned if I moved). I used to talk to Mr. Chips (OK so I'm a little crazy) so today I started to talk to the robin - he, like Mr. Chips wasn't at all fazed by this and just carried on his search for worms. So - I've concluded that it probably IS Mr. Chips.

My second robin appeared not long after I came inside - s/he wasn't ringed so I know I have at least two in the garden.

Whether or not he's Mr. Chips - he was a great companion to have whilst I worked. I'm now going to collapse to recover whilst you enjoy (I hope) some pictures of my gardening assistant. 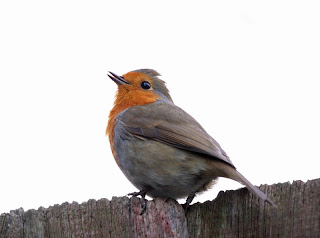 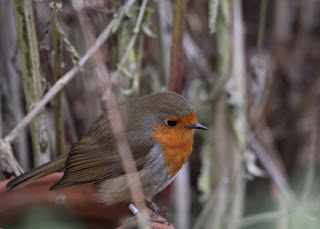 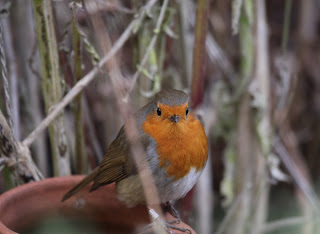 Email ThisBlogThis!Share to TwitterShare to FacebookShare to Pinterest
Labels: Birds

what a little beauty great photos too
Sheila

And what a lovely assistant you had, you cant help but talk to them can you, crazy! who cares.

No wonder your garden looks so lovely, - with a adorable chap like this as helper!

Hope your sore back (and whatever else) gets better soon.

What a beauty! and the company would make the gardening so much more enjoyable.

Sheila - thanks, I hope he stays around.

Paul - I think Dr. Doolittle would be proud of me. I even talk to the frogs in my pond!

Carin - thanks. I think it's a sore "everything" - will I ever be the same again.

Hi Tricia
I went out in the garden this morning to hang out the washing and my "Mr Robin" was there and I said 'good morning' to him. I love Robin's!!

Great photo's again. How did the ringer managed to get the bird so they could ring it?

Hope your aches soak away in a warm bath and that you sleep well.
Jackie.

that kind of hurting actually feels good, doesn't it?
your feathered friend looks like he enjoyed your company.
hope you need to recover quickly

They are such great little birds aren't they......
If you ever find a mealworm while you are working....hold it in your hand and the robin will probably take it....

Hope you had a long soak to relieve your aches and pains......

Hi again Tricia - I've just shown your post and photos to a friend who now lives here but came out from England a few years ago. She loved your post and said she also had robins in her garden back in
England that did the same when she gardened. She also said the Blackbirds did the same too. So thanks from Janet for some pleasant memories!

Hi Tricia - you must be at the computer too as I've just got your posting on my own blog - thanks for visiting and your kind comments...

You're not mad for talking to the birds - I quite often do - it usually confuses the dog as she starts to get all excited and think someone else is there... Robins are lovely to have around whilst you're working - I too have been out today - digging over our veg patch among other things... enjoy the rest of the weekend - despite the aches and pains Miranda

Tricia, you have taken some wonderful shots of that Robin, I to ralk to the birds when in the garden and nobody around. Phil

Jackie - the ringer came at the request of the BBC when they came to film birds and Parakeets in my garden for Nature's Top 40 Wildlife Spectacles. It was broadcast a few weeks ago.

Marmee - on the mend thanks - just don't know when to stop LOL.

Cheryl - nearly got him eating out of my hand but he just wouldn't take that final "step".

Mick - my best wishes to Janet and pleased you have evoked pleasant memories :D

Miranda - I'm sure to visit you again.

Phil, thank you - a like minded talker - nice one!

A wonderful little bird. lol, I guess I'm crazy as well. I often appear to be alone in the garden but am talking away to all manner of creatures. Anyone going by would surely say "She's as mad as a hatter." lol

Well that's you and me both OC - two mad hatters together, talking to the animals :D